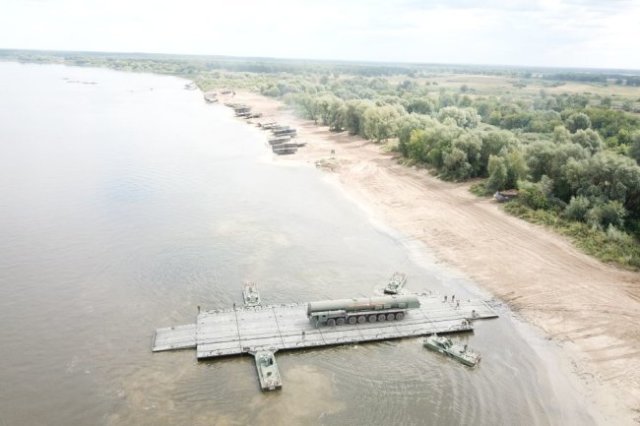 As part of a special exercise in the Vladimir Region, military engineers transported the launch battery of the Yars mobile ground complex through the wide and deep-water Oka at this point. For the first time, a unique 360-ton double-width ferry was involved in the training, the Russian Defense Ministry reported.

The mass of the Yars launcher with a rocket is about 100 tons. An ordinary ferry - even a military one-will not withstand such a huge thing, so a giant ferry the size of a hypermarket parking lot was assembled from entire central links and side half-links for the crossing. Even the RVSN launcher didn't look particularly big on it.

Other equipment of the starting battery: combat security vehicles, combat duty support, a command post-was transported across the river on a unique floating bridge.

- For the first time in world practice, a double-width floating bridge with a lifting capacity of 120 tons was equipped. This made it possible to double the capacity of the crossing and made it possible to pass military and special equipment in passing directions in case of excitement up to three points, " the Defense Ministry said.

According to the plan of the exercises, the road and railway bridges in the area of combat patrol of the Yars missile systems were destroyed. There were also no duplicate crossings that could allow large-sized equipment to pass. The rocket men changed the route, and the engineers quickly prepared a crossing for them.

As part of the exercises, all types of crossings are equipped: landing on floating PTS-2 transporters, ferry and bridge crossings. Traffic on them was regulated by military police units. They also, using boats and motor boats, repelled the attack of the saboteurs of the conditional enemy.

The maneuvers are held under the leadership of the chief of the engineering troops, Lieutenant General Yuri Stavitsky, more than eight thousand servicemen and 1.5 thousand units of military and special equipment participate in them.