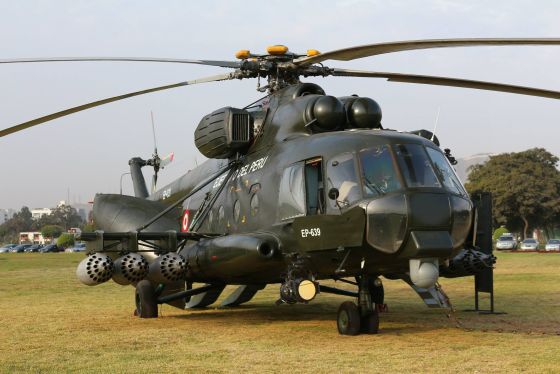 TSAMTO, July 22. The Aviation Department of the National Police of Peru (DIRAVPOL) received two Mi-171Sh transport helicopters under a contract signed at the end of 2019 with the Belspetsvneshtechnika State Technical University (Republic of Belarus).

As reported by Infodefensa.com helicopters with registration numbers PNP-511 and PNP-512 were delivered to the Jorge Chavez International Airport on July 19 aboard An An-124 Ruslan heavy military transport aircraft.

The cars received a new scheme of inconspicuous coloring with shades of gray and dark green instead of white and dark green coloring, previously preferred by the DIRAVPOL management. One of the main features of the received helicopters is the installation of new VK-2500-03 turboshaft engines of increased power for use in operations in the highlands.

As previously reported by TSAMTO, the Committee for the Evaluation of Contracts with Foreign States (CECEE) under the Ministry of Internal Affairs of Peru in the tender for the supply of two medium-sized helicopters in August 2019 awarded the victory to the Belspetsvneshtechnika GVTUP (Republic of Belarus) with the Mi-171Sh transport helicopter. The contract was concluded within the framework of the program "Improvement of aviation and tactical operations of the Police Aviation Department in the eastern part of Peru", which provides for the purchase of two medium transport helicopters.

As it was stated, after the evaluation of the technical description, technical specifications, operational characteristics, delivery dates, guarantees provided, personnel training conditions and proposals for industrial compensation (offset obligations), the Mi-171SH, which was submitted by the State Foreign Trade Unitary Enterprise Belspetsvneshtechnika, accredited by the Ulan-Ude Aviation Plant (part of JSC Russian Helicopters), won the tender with a weighted result of 67.6 points and the proposed cost of about 46.8 million dollars. The second place was taken by the H-215 of Airbus Helicopters with a score of 29.7 points and a cost of about $ 61 million.

The contract for the supply of two Mi-171Sh was signed within the framework of an intergovernmental agreement.