Rostec Corporation will create an unmanned version of the Checkmate fighter 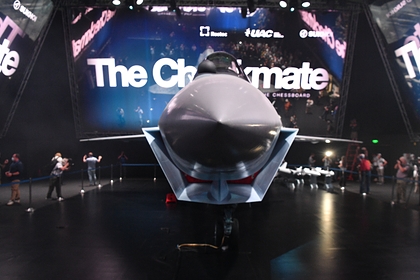 The United Aircraft Corporation (UAC) "Rostec" will create an unmanned version of the Checkmate light tactical fighter ("Checkmate"), equipped with one engine. Rostec said this at a presentation during the International Aviation and Space Salon of 2021 (MAKS-2021), TASS reports .

"An unmanned version of the aircraft is being created," the corporation said.

According to the head of the UAC, Yuri Slyusar, it is expected that the unmanned fighter will arouse the interest of potential customers, including the Russian Aerospace Forces.

In addition, a carrier-based fighter can be created on the basis of Checkmate, said Deputy chief designer of the aircraft Alexey Bulatov, his words are quoted by RIA Novosti . "The ship's version is also being considered ... this will be a separate topic, today we are considering the basic version, " Bulatov said at the presentation.

Earlier, Rostec presented a sample of the first Russian light tactical single-engine fighter during the International Aviation and Space Salon of 2021 (MAKS-2021) [...] . The aircraft for foreign customers will be called Checkmate ("Checkmate"). The possible name of the fighter within the country is the Su-75. According to the head of Rostec, Sergey Chemezov, it will cost from 25 to 30 million dollars.

It is planned that the first Checkmate flight will take place in 2023, and prototypes will be created in 2024. The first deliveries should begin in five and a half years. At the same time, it is specified that the fighters will be designed for the price set by the customer.

The rights to this material belong to Lenta.ru
The material is placed by the copyright holder in the public domain
Страны
Россия
Продукция
Checkmate
Компании
ОАК
Ростех
Персоны
Слюсарь Юрий
Чемезов Сергей
Проекты
МАКС-20XX
Do you want to leave a comment? Register and/or Log in
Log in via Facebook
The Permanent Representative of the Russian Federation to international organizations in Vienna Ulyanov called the refusal of AUKUS to provide data on the union abnormal
The United States agrees with Stoltenberg on the inadmissibility of Russia's influence in the issue of NATO expansion
In the USA, it was proposed to ban "Solntsepeki" and "Pinocchio"
Putin signed the law on the powers of Roscosmos in the field of infrastructure construction
Korean aircraft carrier "won back" funding
Конфликты: Йемен - "забытая" война
The National Interest (США): российский танк Т-80 — это не шутка
In the USA, they were surprised by the size of the Su-75
Russia will offer India the technology of the Octopus tank
Шойгу счел необходимым построить в России еще несколько крупных городов
The State Duma appreciated the idea of banning the sale of grenades after the shooting at the MFC in Moscow
British military demanded $1.1 million for stuttering after Estonian frosts
Sasapost (Египет): американцы создают самый мощный лазер в истории. Что это значит?
Tank killer: the work of the PTKM-1R anti-roof mine was shown on video
Корпорация "Иркут" до конца 2018 года поставит ВКС РФ более 30 истребителей Су-30СМ
other topics discussed
2006-2021 © ВПК.name. All rights reserved.
When reprinting, link to ВПК.name required.
User agreement.
№ 21-PP in the register of information distributors.
18+
Website hosting: TimeWeb.