Sergei Shoigu checked how the Mi-28NM helicopters are produced 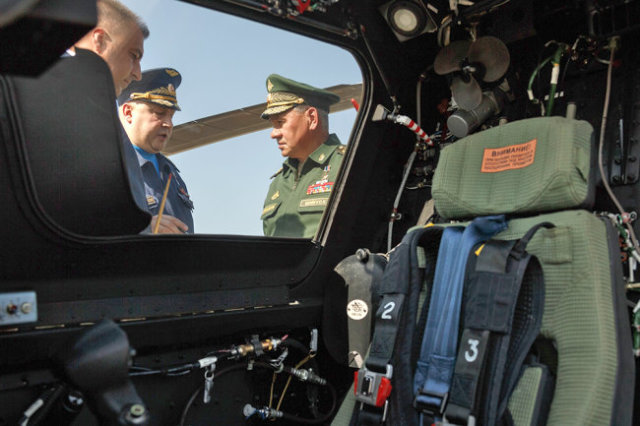 Yesterday, Defense Minister Sergei Shoigu checked how the Rostov helicopter production complex is fulfilling the largest military order. By 2028, 98 new Mi-28NM attack helicopters - an updated version of the famous "Night Hunter" - are to be produced there. The state contract was concluded after a personal order of President Vladimir Putin to increase purchases of these rotorcraft.

The appearance of the improved "night hunters" differs significantly from the basic version of the helicopter. A new complex of avionics and advanced types of weapons was installed on the Mi-28NM. Thus, the Chrysanthemum complex with an electronic control system gives the crew the opportunity to hit tanks with armor up to 1200 mm at a distance of up to 6 kilometers. A missile with a range of up to 25 kilometers was also developed for the Mi-28NM. In short, the helicopter turned out to be powerful, and now it is important that such machines appear faster in the troops.

One of the regiments of the 150th Motorized Rifle Division is stationed in Rostov-on-Don. The minister was interested not only in the combat readiness of the unit, but also in the social and household infrastructure. To evaluate it, Shoigu went to the dining room, which serves soldiers on the principle of a "buffet". There, the governor of the Rostov region, Vasily Golubev, noted: his region is collecting record grain harvests. "I am very happy for you. But why is there only one bagel on the festive table?" Shoigu reacted. The governor promised to correct the situation.

For the updated Mi-28NM, a missile with a target range of up to 25 kilometers was developed

In its own way, Shoigu's trip to the Sambek Heights museum complex turned out to be significant. Its expositions use information about front-line soldiers-natives of the Rostov region, obtained from the base of the Moscow region museum "The Road of Memory", created on the initiative of Shoigu. As there, visitors to the "Sambek Heights" can also find information about their relatives who fought for their Homeland.

When the minister and the governor approached the Battle Flags of the units that liberated the Rostov land from the Nazis, it turned out that these were not originals, but copies of the banners. "We need to work in the storerooms of the Museum of the Armed Forces, find real banners and transfer the relics to the Sambek Heights museum complex," Shoigu immediately ordered.

The rights to this material belong to Российская газета
The material is placed by the copyright holder in the public domain
Страны
Швеция
Продукция
Ми-28Н
Персоны
Путин Владимир
Шойгу Сергей
Do you want to leave a comment? Register and/or Log in
Log in via Facebook
The Permanent Representative of the Russian Federation to international organizations in Vienna Ulyanov called the refusal of AUKUS to provide data on the union abnormal
The United States agrees with Stoltenberg on the inadmissibility of Russia's influence in the issue of NATO expansion
In the USA, it was proposed to ban "Solntsepeki" and "Pinocchio"
Putin signed the law on the powers of Roscosmos in the field of infrastructure construction
Korean aircraft carrier "won back" funding
Конфликты: Йемен - "забытая" война
The National Interest (США): российский танк Т-80 — это не шутка
In the USA, they were surprised by the size of the Su-75
Russia will offer India the technology of the Octopus tank
Шойгу счел необходимым построить в России еще несколько крупных городов
The State Duma appreciated the idea of banning the sale of grenades after the shooting at the MFC in Moscow
British military demanded $1.1 million for stuttering after Estonian frosts
Sasapost (Египет): американцы создают самый мощный лазер в истории. Что это значит?
Tank killer: the work of the PTKM-1R anti-roof mine was shown on video
Корпорация "Иркут" до конца 2018 года поставит ВКС РФ более 30 истребителей Су-30СМ
other topics discussed
2006-2021 © ВПК.name. All rights reserved.
When reprinting, link to ВПК.name required.
User agreement.
№ 21-PP in the register of information distributors.
18+
Website hosting: TimeWeb.