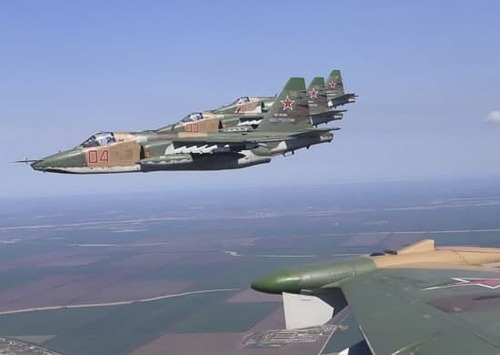 Moscow. July 10. INTERFAX-AVN-The crews of Su-25SM attack aircraft of the Russian Kant air base in Kyrgyzstan conducted an exercise to search for bases of conditional militants, the press service of the Central Military District (CVO) reported on Saturday.

"In the rarefied air of the Edelweiss test site in the Issyk-Kul region, Russian pilots performed tasks to search for the bases of a simulated enemy disguised in the folds of the mountain terrain," the report says.

It is noted that the pilots also worked out techniques for getting out from under conditional strikes of portable anti-aircraft missile systems of the enemy with simultaneous data transmission to ground control points.

"In total, up to 400 military personnel of flight, engineering and technical personnel, as well as ground support services for flights, 10 aircraft and more than 30 units of automotive equipment were involved in the exercise," the Central Military District reported.

On July 6, the press service of the Central Military District reported that attack and transport-combat helicopters of the Russian military base in Tajikistan conducted an exercise with missile launches. The maneuvers took place against the background of the aggravated situation in Afghanistan.

"In Tajikistan, during a tactical flight exercise, the crews of Mi-24 attack helicopters and Mi-8MTV5-1 transport and combat helicopters of the 201st military base launched a missile attack on a group of a conditional illegal armed formation," the press service of the Central Military District reported on Tuesday.

According to the military, two Mi-24 attack helicopters and two Mi-8MTV5-1 transport and combat helicopters, about 100 military personnel from among the flight, engineering and technical personnel, as well as flight support and control groups were involved in the tactical flight exercise.

The United States and its allies must withdraw their troops from Afghanistan by September 11 this year. The withdrawal of troops takes place against the background of the activation of the Taliban movement in Afghanistan (banned in the Russian Federation). Since May, the Taliban have been conducting a large-scale offensive and pushing back government forces.

According to media reports, the Taliban control more than 100 districts of the country. It is reported that groups of soldiers of the Afghan government forces are crossing into the territory of Tajikistan under the onslaught of the Taliban.

After the collapse of the USSR, the Tajik-Afghan border was guarded by Russian border guards. In 2005, the border protection was completely transferred to the jurisdiction of the State Border Protection Committee of Tajikistan, Russian border guards were withdrawn from Tajikistan. The border department of the FSB of the Russian Federation in Tajikistan was transformed into an operational border group without a military component.

The 201st Russian military base operates in Tajikistan. This is the largest military facility of Russia outside its borders.