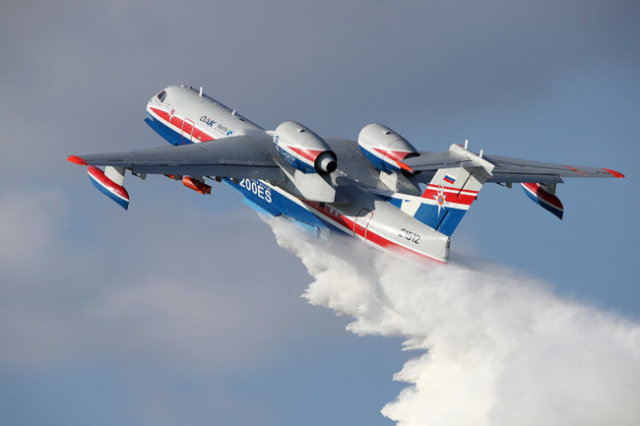 The US Special Operations Command said they needed an amphibious aircraft. It must have the characteristics of the Russian seaplane Be-200ChS, which is produced at the aircraft factory in Taganrog.

According to Popular Mechanics, the basis for the new amphibian will be to upgrade the C-130 Hercules military transport aircraft. It is planned that the aircraft will have a large payload capacity and a range of flight. In addition to transporting commando fighters, the seaplane is planned to be used for servicing submarines.

"In the future conflict, the most important battlefields will be waterways such as the South China Sea, the Sea of Okhotsk, the Baltic Sea, the Yellow Sea, and the Persian Gulf. A seaplane would help prevent such conflicts if potential adversaries knew that American commandos could enter and exit disputed waters, " the publication says.

It should be noted that in July 2020, the Ministry of Defense of the Russian Federation received the first amphibious aircraft Be-200ChS, which was named in honor of the pilot Alexander Mamkin who died in 1944. The aircraft can carry up to 43 people on board. The maximum speed is up to 700 km / h at an altitude of 7000 meters. Practical flight range - 3100 kilometers, ceiling-8100 meters, rate of climb-8 m / s. The crew of the plane is two people.

The rights to this material belong to Российская газета
The material is placed by the copyright holder in the public domain
Страны
Китай
Россия
США
Продукция
C-130
Бе-200
Бе-200ЧС
Компании
Минoбороны РФ
Проекты
2020-й год
Do you want to leave a comment? Register and/or Log in
Log in via Facebook
The Permanent Representative of the Russian Federation to international organizations in Vienna Ulyanov called the refusal of AUKUS to provide data on the union abnormal
The United States agrees with Stoltenberg on the inadmissibility of Russia's influence in the issue of NATO expansion
In the USA, it was proposed to ban "Solntsepeki" and "Pinocchio"
Putin signed the law on the powers of Roscosmos in the field of infrastructure construction
Korean aircraft carrier "won back" funding
Конфликты: Йемен - "забытая" война
The National Interest (США): российский танк Т-80 — это не шутка
In the USA, they were surprised by the size of the Su-75
Russia will offer India the technology of the Octopus tank
Шойгу счел необходимым построить в России еще несколько крупных городов
The State Duma appreciated the idea of banning the sale of grenades after the shooting at the MFC in Moscow
British military demanded $1.1 million for stuttering after Estonian frosts
Sasapost (Египет): американцы создают самый мощный лазер в истории. Что это значит?
Tank killer: the work of the PTKM-1R anti-roof mine was shown on video
Корпорация "Иркут" до конца 2018 года поставит ВКС РФ более 30 истребителей Су-30СМ
other topics discussed
2006-2021 © ВПК.name. All rights reserved.
When reprinting, link to ВПК.name required.
User agreement.
№ 21-PP in the register of information distributors.
18+
Website hosting: TimeWeb.