The detachment of the International Mine Action Center for 5 years cleared more than 6.5 thousand hectares of the territory of Syria 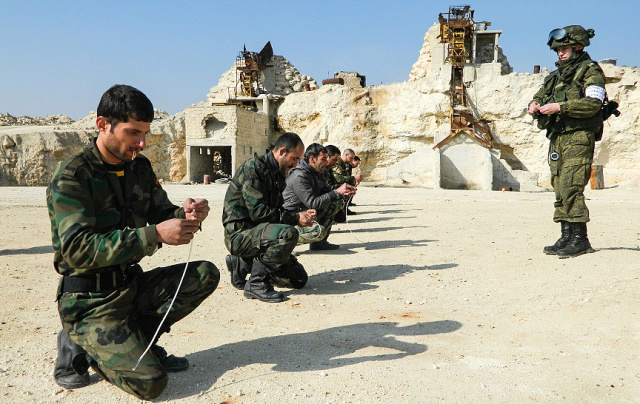 TSAMTO, May 27. The detachment of the International Mine Action Center (MPC) of the Russian Armed Forces found and destroyed more than 105 thousand explosive objects and trained more than 1,200 Syrian soldiers during the tasks of clearing the territory of Syria.

This was announced by the deputy head of the MPC, Colonel Oleg Kryzhanovsky.

"In the course of carrying out special tasks in the Syrian Arab Republic, the Center's detachment has carried out mine clearance tasks four times in five years. Russian sappers, risking their lives, were the first to enter the cities liberated from terrorists, which allowed to save thousands of civilian lives and return to the world the pearls of the cultural and historical heritage of humanity, "O. Kryzhanovsky said, speaking at the 4th International Conference on Humanitarian Demining and Countering Improvised Explosive Devices, which opened on May 26 in the Moscow Region on the basis of the Patriot Convention and Exhibition Center.

During this period, the specialists of the MPC cleared 6.5 thousand hectares, 1400 km of highways, 17 thousand military and civilian objects. They found and destroyed more than 105 thousand explosive objects, more than 31 thousand of which were improvised explosive devices. The deputy head of the MPC also noted that in the Syrian branch of the Center, Russian specialists passed on their experience and trained more than 1,200 colleagues who continue to work on the final cleaning of the liberated territories of the country, according to the Department of Information and Mass Communications of the Russian Defense Ministry.