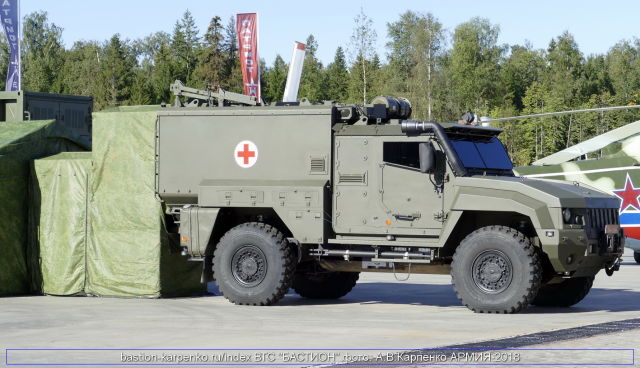 Novosibirsk. May 19. INTERFAX-SIBERIA-The latest armored vehicles for transporting the wounded "Lens" entered service in the motorized rifle unit of the combined arms association of the Central Military District (CVO), stationed in the Kemerovo region - Kuzbass, the press service of the district reported on Wednesday.

"A batch of two medical armored vehicles "Lens" with an equipped compartment for transporting the wounded has joined the fleet of combat vehicles of the reconnaissance unit, " the report says.

The medical armored vehicle "Lens" is designed for the search, collection and removal of the wounded from the battlefield and the centers of mass sanitary losses, the car has three seats for the crew and six folding seats for the wounded, as well as mounts to accommodate two to four stretchers.

As a base vehicle, an armored car with a 4x4 wheel formula from the Typhoon families is used. The curb weight of the vehicle is more than 15 tons, its reservation provides protection for the crew and the transported wounded from armor-piercing bullets from a 7.62 by 54 rifle cartridge, as well as shrapnel. The armored car is also able to protect passengers from the explosion of up to eight kilograms of TNT under the bottom. The maximum speed of the car reaches 105 km/h.