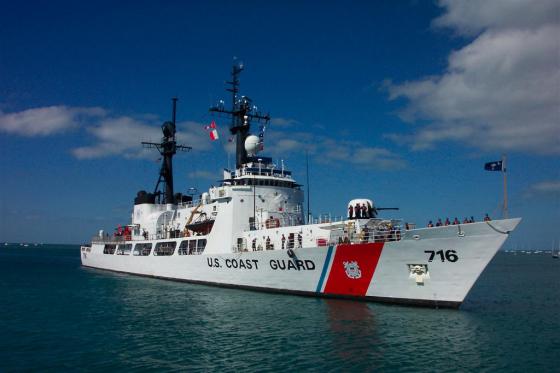 TSAMTO, May 14. The Philippine Navy prefers to purchase the recently decommissioned US Coast Guard Cyclone-class coastal patrol ships instead of the additional Hamilton-class boats.

According to the Philippine news agency PNA, this was officially announced by the commander of the Philippine Navy, Vice Admiral Giovanni Carlo Bacordo, during a briefing on May 10.

D. Bacordo said this, answering a question from one of the journalists about whether the Navy is going to acquire the additional US Coast Guard boat (USCGC) "Mellon" of the Hamilton class, which was decommissioned in August last year.

The Philippine Navy at the beginning of last month for the first time expressed interest in the acquisition of patrol ships of the "Cyclone" class as a temporary replacement for existing obsolete ships. This class of ships is considered more suitable for the current requirements of the Philippine Navy than the three Hamilton-class boats received in recent years (in 2011, 2013 and 2017). The need to purchase a Cyclone-class PC arose due to the decommissioning of ships from the Second World War.

The number of Cyclone PCs purchased by the Philippines will depend on the technical condition of the proposed ships. The Joint Inspection Unit of the Philippine Navy is responsible for evaluating the ships. The Navy hopes to acquire at least five Cyclone-class ships. An appeal will also be sent to the American side with a request to leave the weapons available on the transferred ships, if possible.

The Philippine Navy currently has one Cyclone-class patrol ship, BRP General Mariano Alvarez (PS-38), which was transferred from the U.S. Navy in 2004.

The Cyclone-class coastal patrol ships are a class of 14 patrol ships of the United States Navy. Almost all of them were launched between 1992 and 1994.

The rights to this material belong to ЦАМТО
The material is placed by the copyright holder in the public domain
Страны
США
Филиппины
Продукция
Stinger
Проекты
Hamilton
Do you want to leave a comment? Register and/or Log in
Log in via Facebook
The Permanent Representative of the Russian Federation to international organizations in Vienna Ulyanov called the refusal of AUKUS to provide data on the union abnormal
In the USA, they were surprised by the size of the Su-75
The United States agrees with Stoltenberg on the inadmissibility of Russia's influence in the issue of NATO expansion
In the USA, it was proposed to ban "Solntsepeki" and "Pinocchio"
Putin signed the law on the powers of Roscosmos in the field of infrastructure construction
Korean aircraft carrier "won back" funding
Конфликты: Йемен - "забытая" война
The National Interest (США): российский танк Т-80 — это не шутка
Russia will offer India the technology of the Octopus tank
Шойгу счел необходимым построить в России еще несколько крупных городов
The State Duma appreciated the idea of banning the sale of grenades after the shooting at the MFC in Moscow
British military demanded $1.1 million for stuttering after Estonian frosts
Sasapost (Египет): американцы создают самый мощный лазер в истории. Что это значит?
Tank killer: the work of the PTKM-1R anti-roof mine was shown on video
Корпорация "Иркут" до конца 2018 года поставит ВКС РФ более 30 истребителей Су-30СМ
other topics discussed
2006-2021 © ВПК.name. All rights reserved.
When reprinting, link to ВПК.name required.
User agreement.
№ 21-PP in the register of information distributors.
18+
Website hosting: TimeWeb.