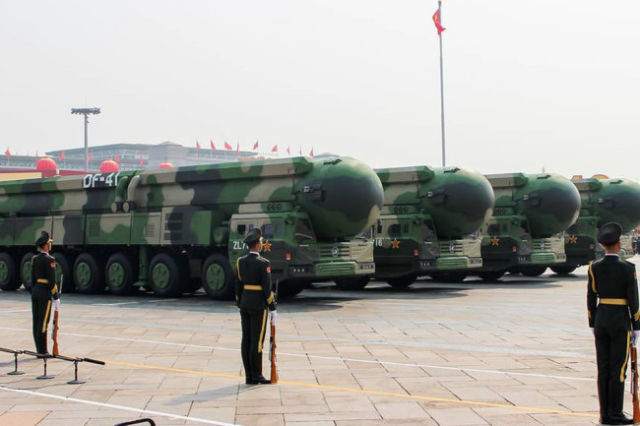 The launcher of the Chinese intercontinental missile system DF-41 was captured on video while it was moving along a public road.

A DF-41 ICBM is running late to the meeting. #aviation https://t.co/X4AfXbv2lp pic.twitter.com/p3om3Sh4lz

It can be seen that a multi-ton combat vehicle with a wheel formula of 8x8 with a fairly decent speed moves in the flow of transport along with ordinary passenger cars.

As noted by military expert Yuri Lyamin, military drivers of the People's Liberation Army, apparently, during the exercises, once again practiced a quick transfer from one area to another.

Therefore, probably, we see on the tractor a transport and launch container not with a real ballistic missile, but with its mass-dimensional layout.

DF-41 (according to the NATO classification CSS-X-10) were first demonstrated in September 2019 at a large-scale military parade dedicated to the 70th anniversary of the founding of the People's Republic of China.

These solid-fuel three-stage ICBMs are currently considered the most advanced and powerful in the PLA's arsenals.

With their own weight of 80,000 kg, they can carry 10 individually guided warheads with a capacity of one megatton each. It is reported that the maximum flight range is 14,000 km.

Currently, according to American data, at least two missile formations of the Chinese army are equipped with such a formidable weapon.