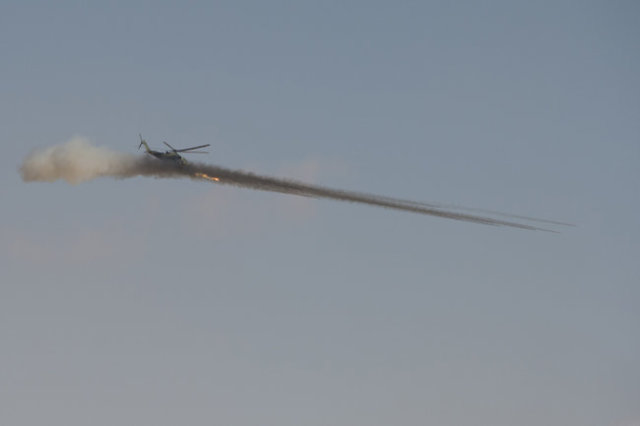 Syrian attack helicopters are used not only during the day, but also during combat missions at night. So, in the Network there were shots of the Mi-24P attack on a ground target, made in the dark.

The enemy was fired from a twin 30-mm automatic gun GSH-30K. This gun is considered one of the most powerful among those used on rotorcraft.

The development was carried out in the Tula Instrument Design Bureau under the leadership of Vasily Gryazev and Arkady Shipunov. The product was produced in Kovrov, at the Plant named after V. A. Degtyarev.

In addition to shells, such a "flying tank" can bring down other ammunition on the enemy. For example, 80-mm unguided aircraft missiles S-8 weighing up to 15.2 kg and a range of up to 2200 meters.

April 10 marked the 40th anniversary of the start of serial production of this modification of the "twenty-fourth".

In the Syrian air force, these "turntables" serve for a relatively short time - their operation here began in 2017. But they have already demonstrated high reliability and survivability, saving the lives of crews in the most extreme situations.