The complex "Pantsir-S1" tipped on its side in Serbia 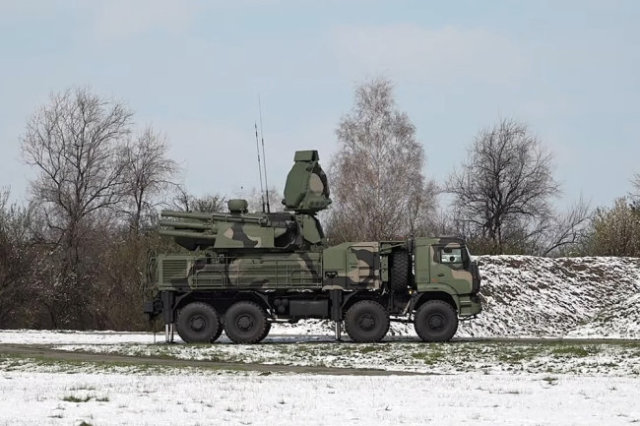 In Serbia, while following one of the highways, the self-propelled anti-aircraft missile and gun system "Pantsir-S1"lay on its side.

Photos of the ZRPC that was involved in the accident have already appeared on the network. It can be seen that the combat vehicle was slightly damaged and can be returned to service quickly enough. At the same time, it is not yet known exactly why everything happened, and whether there are any victims.

A total of 6 such installations are currently in service with the army of this Balkan state.

This is not the first incident with Serbian military equipment. For example, last year, a traffic accident was reported with the latest M84AS1 tank. The MAZ-537 tractor with a trawl, on which the combat vehicle was located, crashed into the structure located next to the highway. No one was injured at the time, and the M84AS1 later took part in the exercise.

Various incidents with military equipment regularly occur in almost all the armies of the world. For example, [...] video footage of a Turkish armored car that fell from a trawl during loading was recently released.

During operation [...], Israeli Merkava tanks were repeatedly overturned. More severe emergencies occurred with American equipment. There are known cases of fires of Abrams tanks and Stryker armored personnel carriers, and last year during a night exercise, one M1A2 hit another with a 120-mm shell.

The rights to this material belong to Российская газета
The material is placed by the copyright holder in the public domain
Страны
Израиль
Сербия
США
Турция
Продукция
96К6 Панцирь-С1
M1 Abrams
Merkava
Stryker
М-84
Проекты
Военные учения
Do you want to leave a comment? Register and/or Log in
Log in via Facebook
The Permanent Representative of the Russian Federation to international organizations in Vienna Ulyanov called the refusal of AUKUS to provide data on the union abnormal
The United States agrees with Stoltenberg on the inadmissibility of Russia's influence in the issue of NATO expansion
In the USA, it was proposed to ban "Solntsepeki" and "Pinocchio"
Putin signed the law on the powers of Roscosmos in the field of infrastructure construction
Korean aircraft carrier "won back" funding
Конфликты: Йемен - "забытая" война
The National Interest (США): российский танк Т-80 — это не шутка
In the USA, they were surprised by the size of the Su-75
Russia will offer India the technology of the Octopus tank
Шойгу счел необходимым построить в России еще несколько крупных городов
The State Duma appreciated the idea of banning the sale of grenades after the shooting at the MFC in Moscow
British military demanded $1.1 million for stuttering after Estonian frosts
Sasapost (Египет): американцы создают самый мощный лазер в истории. Что это значит?
Tank killer: the work of the PTKM-1R anti-roof mine was shown on video
Корпорация "Иркут" до конца 2018 года поставит ВКС РФ более 30 истребителей Су-30СМ
other topics discussed
2006-2021 © ВПК.name. All rights reserved.
When reprinting, link to ВПК.name required.
User agreement.
№ 21-PP in the register of information distributors.
18+
Website hosting: TimeWeb.