As the newspaper reports"Kommersant " in the material Anastasia Vedeneeva " Nuclear icebreakers will find a dock in Turkey. Kyzey Star will build it for Atomflot for 5 billion rubles, " the Turkish shipyard Kyzey Star Shipyard became the winner of the competition for the construction of a floating dock for 5 billion rubles for nuclear icebreakers of Atomflot. The contract is scheduled to be signed next week. No Russian shipyard has submitted an application for the competition. According to sources of Kommersant, only the direct costs of building a ship in the Russian Federation exceed its maximum cost. In addition, there is no spare capacity in the Russian Federation that can quickly build a dock with a length of more than 200 m. 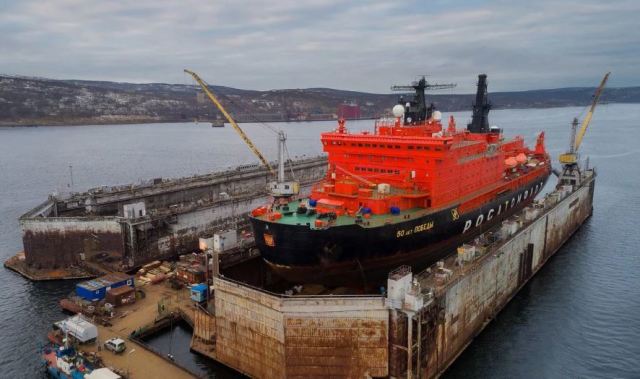 The current floating docks of FSUE "Atomflot" in Murmansk - on the left PD-0002, on the right PD No. 3 (which houses the nuclear icebreaker "50 years of Victory" (c) thevisualized.com

The Kyzey Star shipyard in Tuzla (Istanbul), which is already building two LNG ferries commissioned by Rosmorport for the Ust-Luga-Baltiysk line, will soon receive a new major contract. The shipyard was recognized as the winner in the competition for the construction of a floating dock for nuclear icebreakers for FSUE "Atomflot", subordinate to"Rosatom". This follows from the documentation published on the public procurement website.

The maximum contract price, including zero VAT, is 4.983 billion rubles.

In total, three applications were submitted for the competition - Kyzey, which offered a price of 4.981 billion rubles, the Turkish Epic Denizcilik ve Gemi Insaat A. S., ready to fulfill the order for 4.45 billion rubles, and the Chinese Jiangsu Dajin Heavy Industry Co. LTD. for 4.57 billion rubles. However, the commission refused to allow the last two companies to continue participating in the purchase.

Atomflot told Kommersant that it plans to sign a contract for the construction of the dock next week. The company recalled that the dock is being built at its own expense.

The floating dock must be built within 29 months from the date of signing the contract. It is intended for carrying out dock repairs of nuclear icebreakers, including the new "Arctic" series of project 22220 and nuclear technology support vessels.

The length of the dock is at least 220 m, the width is about 48 m, the height of the pontoon is about 6 m, the load capacity is about 30 thousand tons. The autonomy of the vessel for fuel, water, garbage, etc. - seven days. The crew is about 30 people. The service life of the dock hull should be 40 years.

For the new icebreakers LK-60, given their size, there are almost no suitable docks. The option of their docking in Murmansk on the PD-50 was considered, but it sank. Meanwhile, Russian shipyards have repeatedly stated that the maximum dock price offered by Rosatom is too low. As a result, the first competition of Atomflot, in which only Russian shipyards could take part, did not take place (see "Kommersant" of May 27, 2020). As the deputy head of Rosatom, the head of the directorate of the Northern Sea Route, Vyacheslav Ruksha, clarified in an interview with Kommersant, the state corporation does not plan to increase the price of the contract: "we do not have 8-9 billion rubles, the offers that are available in Russia exceed our capabilities." The new dock is needed by the state corporation "exactly by the fall of 2024", so that all operations are already on the basis of Atomflot. For the time being, the new icebreakers will be docked at the Kronstadt dock, Mr. Ruksha explained.

Sources of "Kommersant" in the industry say that Russian shipyards were ready to build a dock for 8.5 billion rubles. Taking into account the increased metal prices, now this price would be even higher, says one of the interlocutors. The Far Eastern Zvezda offered to fulfill the order for 5.2 billion rubles, says another source familiar with the situation, but the shipyard did not meet the required deadlines. Another interlocutor of "Kommersant" claims that in the Russian Federation there is currently no spare capacity ready to quickly and cheaply build a dock with a length of more than 200 m.

Several interlocutors of Kommersant say that the problem of most Russian shipyards is "fantastic" overhead costs.

At the same time, a number of sources claim that, given the lack of a project and the ability of the customer to make adjustments, the risks that the price will be much higher than the maximum are very high. This means that the order may be unprofitable for the shipyard. The dock has a large metal consumption, requires the installation of expensive equipment, and the direct cost of its construction in the Russian Federation is more than 5 billion rubles, they add.

According to the interlocutors of Kommersant, in fact, Kyzey was created from scratch and the contract for ferries for the Russian Federation became its first major project. But even taking into account the lack of experience, the deadlines for the delivery of ferries were shifted only by six months, the reason for this was the pandemic (see "Kommersant" of August 3, 2020). The interlocutors of Kommersant note that Kyzey has less overhead costs and there are no difficulties with the purchase of equipment, as in the USC shipyards that have fallen under the sanctions.