The Magadan submarine will be launched on March 26 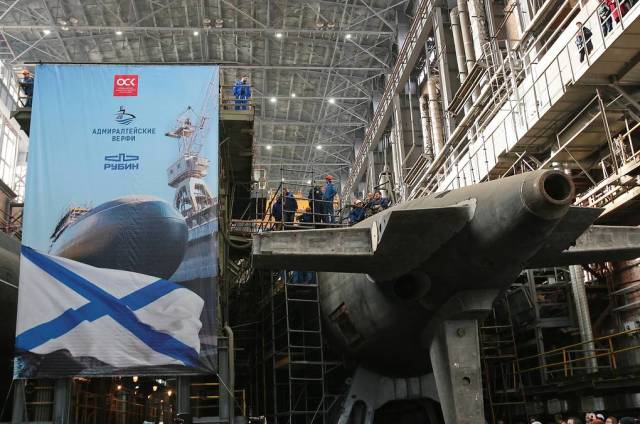 This is the third submarine of the project 636.3 for the Russian Navy

ST. PETERSBURG, March 23. /TASS/. "Admiralty Shipyards" will launch the third large diesel-electric submarine "Magadan" for the Pacific Fleet of the Russian Federation on March 26. This was reported by the press service of the shipyards on Tuesday.

"On March 26, 2021, the Admiralty Shipyards JSC will hold a solemn ceremony of launching the Magadan submarine of the project 636.3 for the Russian Navy," the message reads.

Magadan is the third submarine of the series for the Pacific Fleet, laid down on November 1, 2019. Today, the degree of technical readiness of the ship is more than 80%, the final stage of preparing the ship for the descent is underway, the installation of rubber-technical special coating on the hull is being carried out. Next in the schedule - the final coloring, closing of the trigger certificates and certificates.

The contract for the construction of a series of submarines was signed in September 2016. The first ship, the Petropavlovsk - Kamchatsky, was handed over to the Russian Navy on November 25, 2019. The second submarine in the series, the Volkhov, joined the Pacific Fleet on October 24, 2020.

Submarines of the modified project 636.3 have a higher (compared to previous projects) combat effectiveness. The optimal combination of acoustic stealth and target detection range, the latest inertial navigation system, a modern automated information and control system, and powerful high-speed torpedo and missile weapons ensure the world priority of ships of this class in the field of non-nuclear submarine shipbuilding.

The autonomous navigation of the project 636 submarines is 45 days, the maximum diving depth is 300 m; the underwater speed is 18 knots. Crew - 52 people. The boat has six torpedo tubes.

The rights to this material belong to ТАСС
The material is placed by the copyright holder in the public domain
Страны
Россия
Продукция
С-75
Компании
Адмиралтейские верфи
Проекты
2020-й год
636.3
877 Палтус
ТОФ
Do you want to leave a comment? Register and/or Log in
Log in via Facebook
The United States agrees with Stoltenberg on the inadmissibility of Russia's influence in the issue of NATO expansion
The Permanent Representative of the Russian Federation to international organizations in Vienna Ulyanov called the refusal of AUKUS to provide data on the union abnormal
In the USA, it was proposed to ban "Solntsepeki" and "Pinocchio"
Putin signed the law on the powers of Roscosmos in the field of infrastructure construction
Korean aircraft carrier "won back" funding
Конфликты: Йемен - "забытая" война
The National Interest (США): российский танк Т-80 — это не шутка
In the USA, they were surprised by the size of the Su-75
Russia will offer India the technology of the Octopus tank
Шойгу счел необходимым построить в России еще несколько крупных городов
The State Duma appreciated the idea of banning the sale of grenades after the shooting at the MFC in Moscow
British military demanded $1.1 million for stuttering after Estonian frosts
Sasapost (Египет): американцы создают самый мощный лазер в истории. Что это значит?
Tank killer: the work of the PTKM-1R anti-roof mine was shown on video
Корпорация "Иркут" до конца 2018 года поставит ВКС РФ более 30 истребителей Су-30СМ
other topics discussed
2006-2021 © ВПК.name. All rights reserved.
When reprinting, link to ВПК.name required.
User agreement.
№ 21-PP in the register of information distributors.
18+
Website hosting: TimeWeb.