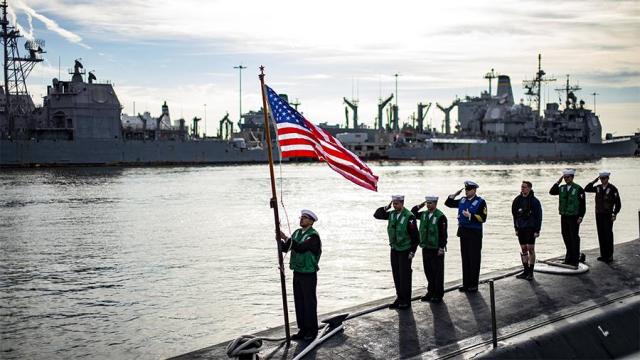 The US submarine USS John Warner in 2018 prepared to attack Russian ships off the coast of Syria. This was reported by the Fox News channel.

On April 14, 2018, the submarine John Warner attacked the territory of the SAR with six Tomahawk missiles. On that day, the US, French and British militaries fired more than 100 missiles at military and civilian targets in Syria.

As reported on the TV channel on February 28, after the shelling of Syria, the American submarine plunged into the water and prepared for an attack by Russian warships, "which will pose a threat and will take measures against the US Navy fleet."

The REN TV channel clarified on Wednesday, March 3, that the submarine was covered by one of the warships that also participated in the shelling of Syria.

The UN Security Council raised the issue of aggressive actions by Western countries, but the Russian document condemning the missile attack on the territory of the SAR was never adopted.


Earlier, on February 26, the United States launched an airstrike on an object in Syria that may belong to the Iranian armed forces.

According to The Washington Post, several people were killed in the airstrike. As the head of the Pentagon, Lloyd Austin, is sure, the strike was inflicted on the Shiite group, which had previously made sorties in Iraq, including against the interests of the United States.

On February 26, Russian Foreign Minister Sergei Lavrov said that the United States had warned the Russian military about an impending strike on Syrian targets a few minutes before it. On the same day, Russian Foreign Ministry spokeswoman Maria Zakharova said that Russia strongly condemns the US airstrike on Syria. She also confirmed Moscow's rejection of any attempts to turn the Syrian territory into an arena for settling geopolitical scores.