The drone was entrusted with the binding of rebar 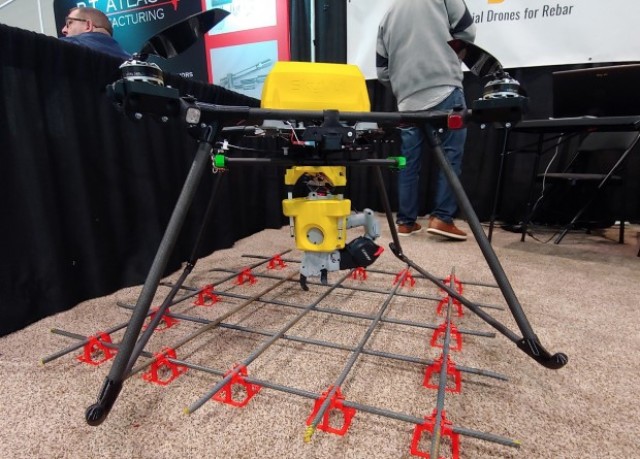 The American company SkyMule has shown tests of a drone that helps builders prepare rebar for pouring concrete. It independently flies over the laid rebar and binds the bars, saving workers ' time.

Practically all concrete structures are created using steel or composite reinforcement-long longitudinal and transverse rods that form a mesh structure inside the concrete, which increases the strength of the structure after the concrete solidifies. Before pouring the concrete, the workers lay the rebar lengthwise and crosswise, and then tie it together by fastening the intersecting bars with wire (in some cases, welding is used instead of wire). Binding allows you to fix the bars of the reinforcement in the desired position before pouring concrete, and also increases the final strength. This is a simple process that does not require much preparation, but it takes quite a lot of time from the workers and thus increases the duration of construction. To speed up the process, you can use a knitting gun, which winds the wire itself at the intersection, but this still requires the builder to walk on the not yet connected mesh of rebar.

SkyMule has developed a drone that is equipped with the same gun, but does all the work itself. The engineers used a quadrocopter with large landing legs and attached a gun to the bottom of it for binding rebar. It is fixed on a movable platform, so after landing, the drone corrects its position by placing it exactly above the crosshair of the two bars. After that, the gun is lowered and winds the wire.


Thanks to the mobile platform, the drone can wrap two crosshairs with wire at a time (one landing). After the available crosshairs end, he rises into the air for a couple of tens of centimeters and flies to the neighboring ones.

The company claims that the drone speeds up the mating process by 2.4 times, and also makes it 32 percent cheaper, but does not specify exactly how it conducted the calculations.

Earlier, we talked about other robots and drones that replace or help construction workers. For example, Swiss engineers have taught the robot to create a rebar frame and weld it in crosshairs, and the Americans have created a drone that independently sits on the roof and nails tiles to it.