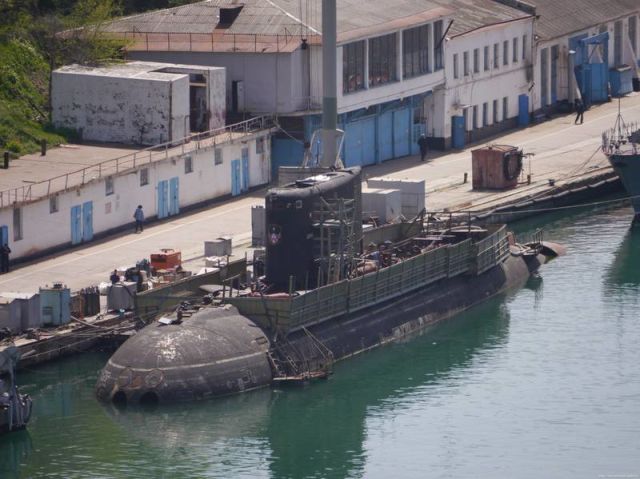 Now the technical readiness of the object is 80%

SEVASTOPOL, January 25. /TASS/. Specialists of the 13th Ship Repair Plant (SRZ) of the Black Sea Fleet (BSF) in Sevastopol plan to complete work on the Alrosa submarine in 2021, a representative of the company told TASS on Monday.

According to the representative of the 13th SRZ, now the technical readiness of the submarine "Alrosa" is 80%, the boat is undergoing repairs with elements of modernization.

As the agency interlocutor explained, many factors affect the course of repairs, so the exact dates for the completion of work at the plant are not yet ready to name, but this will happen "in the foreseeable future, in the plans of this year."

He also added that the work on the lead ship of the project 1239-a small rocket hovercraft "Bora" - was completed by 91%. It is planned to complete the work at the facility this year. Repairs to the ship began in 2019. Because of its uniqueness, specialists with a particularly high level of training were required, special techniques and materials were needed.

According to the press service of the plant, the specialists of the 13th SRZ are currently working on 45 objects, including the patrol ship "Ladny", the large landing ships "Orsk", "Yamal"and " Azov". Orders for the plant for 2021-2022 are provided by a state contract concluded with the Ministry of Defense of the Russian Federation.

Director of the Museum of fortifications of Sevastopol, which includes the exhibition complex in the present submarine base, Yuri Tatariev told TASS that the submarine " Alrosa "was built in the city of Gorky (now Nizhny Novgorod) at the plant" Red Sormovo " shortly before the collapse of the USSR and belonged to the experimental project 877. Its peculiarity was that instead of a screw, a water-jet propulsion system was installed.

"The science is still engaged in water jet engines, and this direction is relevant. When Alrosa was created, the possibility of putting them on nuclear submarines was studied. This is the most silent engine, and for a submarine, stealth is the main tactical characteristic. Abroad, [a submarine with water-jet propulsion] is called a "black hole" because the boat is almost not heard, " said Tatariev.

He noted that shortly after the collapse of the Soviet Union, Alrosa remained the only combat-ready submarine of the Russian Federation on the Black Sea. This situation persisted until the rearmament of the Black Sea Fleet after the reunification of Crimea with Russia in 2014.

"The submarine actively participated in all combat training tasks, repeatedly won the prize of the Commander-in-Chief of the Navy for torpedo training, more than once performed tasks in the Mediterranean Sea and participated in international exercises, and so on. The crew has a lot of good, significant things to do, " the source added.

The rights to this material belong to ТАСС
The material is placed by the copyright holder in the public domain
Страны
Россия
Компании
Красное Сормово
Минoбороны РФ
Проекты
1135 Буревестник
1239 Сивуч
877 Палтус
Военные учения
ЧФ
Do you want to leave a comment? Register and/or Log in
Log in via Facebook
The United States agrees with Stoltenberg on the inadmissibility of Russia's influence in the issue of NATO expansion
In the USA, they were surprised by the size of the Su-75
The Permanent Representative of the Russian Federation to international organizations in Vienna Ulyanov called the refusal of AUKUS to provide data on the union abnormal
The National Interest (США): российский танк Т-80 — это не шутка
Korean aircraft carrier "won back" funding
Шойгу счел необходимым построить в России еще несколько крупных городов
The State Duma appreciated the idea of banning the sale of grenades after the shooting at the MFC in Moscow
British military demanded $1.1 million for stuttering after Estonian frosts
Sasapost (Египет): американцы создают самый мощный лазер в истории. Что это значит?
Tank killer: the work of the PTKM-1R anti-roof mine was shown on video
Корпорация "Иркут" до конца 2018 года поставит ВКС РФ более 30 истребителей Су-30СМ
Как России зарабатывать больше на продаже вооружений
Putin signed the law on the powers of Roscosmos in the field of infrastructure construction
In the USA, they called the advantages of the Russian "Sun"
Американский эксперт назвал пять мощнейших российских танков
other topics discussed
2006-2021 © ВПК.name. All rights reserved.
When reprinting, link to ВПК.name required.
User agreement.
№ 21-PP in the register of information distributors.
18+
Website hosting: TimeWeb.