Launched head frigate of the class "Istanbul" for the Turkish Navy 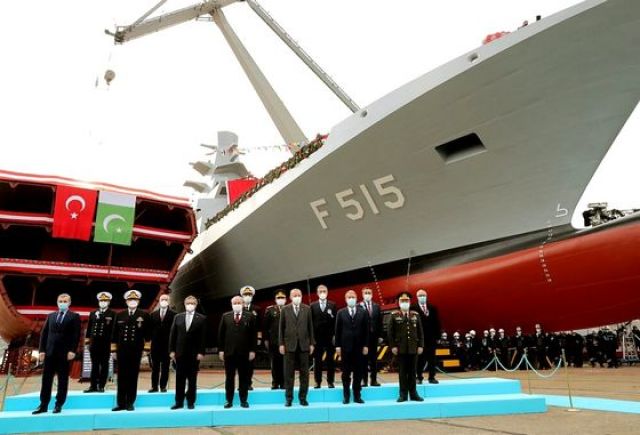 TSAMTO, January 25. According to the Turkish Anadolu agency, on January 23, the launch ceremony of the lead frigate (F-515) "Istanbul", which is being built according to the national project, was held at the Istanbul Naval Shipyard.

The event was attended by Turkish President Recep Tayyip Erdogan.

As planned, the frigate will be transferred to the command of the Turkish Navy in 2023. In total, the Turkish Navy intends to adopt 4 frigates of the new series. They will be used to perform the tasks of air defense, patrol, escort of other ships and anti-submarine warfare.

The frigate project was developed as part of the MILGEM program (Milli Gemi – national ship), aimed at developing the capabilities of the Turkish industry in the field of designing and building warships. Earlier, four Ada-class corvettes were built for the Turkish Navy as part of this project. Turkey has also signed a contract for the construction of three Ada-class corvettes with Pakistan. Recently, an agreement was signed for the supply of five ships with Ukraine.

As reported by TSAMTO, the command of the Naval Forces carried out the design of the ship in two years, taking as a basis the project of the corvette class "Ada". The steel cutting ceremony for the construction of the Istanbul-class lead frigate was held on January 19, 2017 at the Istanbul Naval Shipyard, which is the main contractor for the construction of the ship.

According to available data, the length of the Istanbul-class frigate will be 113.2 m, width-14.4 m, draft-4.05 m, displacement-about 3000 tons, crew-125 people. The ship will be equipped with a combined main power plant of the CODAG type, including two MTU 20V 4000 M91L diesel engines and an LM2500 GTD. The estimated maximum speed is 29 knots. The cruising range will be 6570 nautical miles at a speed of 14 knots. The armament will include one 76-mm AU Oto Melara Super Rapid, two 25-mm automatic guns STOP company Aselsan, ZAK GOKDENIZ, 16 anti-ship missiles "Harpoon" or RCC "Atmaka" company Roketsan, 16 SAM HISAR and two twin-tube 324-mm torpedo launchers. The ship will be equipped with a flight deck and hangar for the S-70B Seahawk helicopter and one unmanned aerial vehicle.

The frigate will be equipped with an infrared detection and tracking system developed by the Turkish company ASELSAN, a Turkish-made electronic warfare system. The ship will be equipped with guided missiles and a national-made anti-torpedo defense system. In addition to ASELSAN, the systems of its own design for frigates will be manufactured by the Turkish company Havelsan. About 80 subcontractors will supply more than 150 systems for various purposes for the ship. About two-thirds of the subcontractors are Turkish companies. In particular, national companies will supply weapons and electrical systems, diesel generators, integrated control systems, radiation, chemical, biological protection systems, etc.