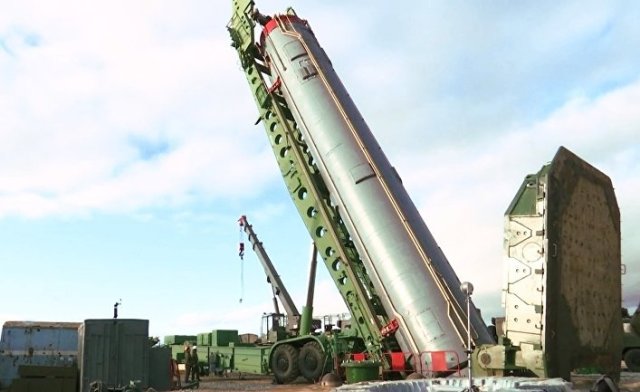 The author turns to the most advanced military topic: are hypersonic missiles so invulnerable? After all, it is with them that Russia's hopes are connected "not with numbers, but with the ability" to defend itself against the superior forces of the NATO bloc. The author claims that hypersonic missiles are not so superior to ballistic missiles, which means that they will not provide a "balance of fear" for cheap. And in the new, less expensive balance of fear is Russia's goal: not to compete with the Americans in suicidal defense spending, but to create a small amount of invulnerable to a potential enemy missile that can "scare off" a potential aggressor.

- According to American scientists, computer models indicate that hypersonic weapons do not have significant advantages over ICBMs (intercontinental ballistic missiles) in either speed or invisibility.

- Russia, China and the United States are actively working to create a variety of hypersonic systems.

Hypersonic missiles have been overestimated in terms of speed, and they can be detected by early warning systems. This is stated in the report of American security experts, who suggest that such missiles are comparable in characteristics to conventional ballistic missiles.

China, Russia and the United States are studying the potential of these missiles, which fly at low altitudes on a lower and flat trajectory than intercontinental ballistic missiles. This allows you to reduce the time from launch to hit the target. After the launch booster is reset, hypersonic missiles can change their flight path.

But computer models suggest that while hypersonic missiles with a launch acceleration and planning system fly faster at short distances, they are slower at long distances than intercontinental ballistic missiles due to air resistance.

"In addition, the hypersonic missile will in most cases be visible to space-based early detection systems," according to the report published on Saturday on the Science & Global Security website.

"Ultimately, these results show that the characteristics and strategic consequences of using hypersonic weapons are about the same as those of long-established ballistic missiles. Hypersonic weapons have modest advantages, for example, in maneuverability, but the fundamental laws of physics impose restrictions on low-altitude flight in the atmosphere, which is why this weapon can be called an evolutionary, but not a revolutionary achievement, " the report says.

The report was co-authored by security expert Cameron Tracy (Cameron Tracy) from the American non-profit organization the Union of Concerned Scientists and arms control expert David Wright (David Wright), who works at the Massachusetts Institute of Technology.

"In short, at intercontinental range, hypersonic missiles are slower than ballistic missiles. False are the claims that with the invention of hypersonic weapons, the time of delivery of a warhead to a target from, say, the United States, Russia and China will be reduced," the report notes.

Planning a hypersonic aircraft flying at five times the speed of sound will dramatically change the situation, according to some analysts. They can remain undetected by the radar. However, the report says that space-based infrared detection devices will see them for almost the entire duration of the flight.

"With hypersonic planning in the atmosphere, aircraft are monstrously heated and warm up the air around them, leaving a noticeable infrared trail. When it is sufficiently intense, the device can be detected using space-based sensors, " the authors of the report note.

The United States, China, and Russia have entered the race to create hypersonic weapons, and each of these countries intends to adopt a variety of hypersonic systems in the coming decades.

The Russian hypersonic guided combat unit Avangard is equipped with a nuclear warhead and is launched to the target using a long-range ground-based ballistic missile UR-100N UTTH. China has developed a similar system called the DF-ZF or DF-17, and has conducted at least nine tests since 2014.

Unlike Russia and China, the United States does not develop hypersonic gliding aircraft for nuclear warheads.

By William J. Broad
Jan. 15, 2021
Military experts call hypersonic warheads the next big thing in intercontinental warfare. They see the emerging arms, which can deliver nuclear or conventional munitions, as zipping along at up to five miles a second while zigzagging through the atmosphere to outwit early-warning satellites and some interceptors. The superfast weapons, experts say, lend themselves to surprise attacks.
...
Now, independent experts have studied the technical performance of the planned weapon and concluded that its advertised features are more illusory than real. Their analysis is to be published this week in Science & Global Security.

In an interview, David Wright, a physicist at the Massachusetts Institute of Technology and an author of the new analysis, called the superweapon a mirage.
--------
А также (по гипер ссылке под "is to be published...")

https://tribunecontentagency.com/article/are-hypersonic-weapons-all-hype/
Are Hypersonic Weapons All Hype?
THE DIPLOMAT JANUARY 19, 2021
Are hypersonics all hype?

A new article by Dr. Cameron L. Tracy of the Union of Concerned Scientists’ Global Security program and Dr. David Wright of Massachusetts Institute of Technology’s Department of Nuclear Science and Engineering in the journal Science and Global Security calls into question whether hypersonics have the technical qualities to make an impact on the strategic balance of power.
...