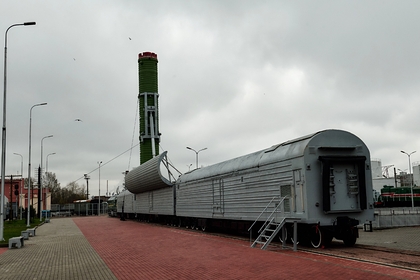 Russia may return its nuclear-powered intercontinental ballistic missile carrier trains to service as a response to the deployment of additional NATO missiles in Europe. The return of the weapons, which can be a "nightmare for the United States," he predicted in an interview with "Moskovsky Komsomolets" military expert Alexei Leonov.

According to him, the new Russian combat railway missile system (BZHRK) could become an effective means of deterring the strengthening of NATO countries on the territory of European states. Leonkov recalled that similar complexes equipped with RT-23UTTH missiles were developed in the USSR by 1987. In 1991, three BZHRK divisions were deployed in the country: in Kostroma, Perm and Krasnoyarsk. Moreover, nuclear trains ran on the same tracks as passenger or freight trains, and were well camouflaged, which made it almost impossible to detect and destroy them by enemy forces.

In 1993, as part of the nuclear disarmament treaty with the United States, part of the BZHRK was removed from service with the Russian army, and some began to be sent for "cutting" — the last composition was transferred for this purpose in 2005. However, in 2009, Russia began to think about the need to create a new nuclear train.

In 2012, development work began, and in 2016, the new BZHRK passed the first tests. It is known that the successor of the Soviet nuclear train was named "Barguzin". It was equipped with lighter RS-24 missiles with a range of up to 11 thousand kilometers, due to which it was lighter and had less destructive effect on railway tracks. Later the project was frozen, but now, said Lenkov, it can revive.

At the same time, another expert, former head of the Military Security Department of the Russian Security Council, former Chief of the General Staff of the Strategic Missile Forces (RVSN), Colonel-General Viktor Esin, was skeptical of such an idea. In his opinion, the reanimation of "Barguzin" can provoke a new round of arms race with the United States. "As soon as we begin to deploy the Barguzin, they will immediately begin to deploy an additional number of their intercontinental missiles. An arms race will begin. Do we need it? " - said Yesin.

He also stressed that the existing state program of armaments until 2027 does not provide for the financing of the BZHRK project. At the same time, the expert noted that if necessary, Russia will be able to respond to threats from NATO countries with the help of other means.

In September last year , the newspaper "Military-Industrial Courier" came up with the idea of putting the Barguzin into service with the Russian army . The publication noted that this would be one of the effective responses to the US initiative, which involves the replacement of American intercontinental ballistic missiles (ICBMs) LGM-30G Minuteman III with more modern means of delivering nuclear warheads.

ЗНШ
05.01.2021 15:52
Экипажи сформировать для начала в виде бронепоездов-Нео с лазерными установками, а там по обстановке.
0
Inform
Do you want to leave a comment? Register and/or Log in
Log in via Facebook
The Permanent Representative of the Russian Federation to international organizations in Vienna Ulyanov called the refusal of AUKUS to provide data on the union abnormal
In the USA, it was proposed to ban "Solntsepeki" and "Pinocchio"
The United States agrees with Stoltenberg on the inadmissibility of Russia's influence in the issue of NATO expansion
Putin signed the law on the powers of Roscosmos in the field of infrastructure construction
Korean aircraft carrier "won back" funding
Конфликты: Йемен - "забытая" война
The National Interest (США): российский танк Т-80 — это не шутка
In the USA, they were surprised by the size of the Su-75
Russia will offer India the technology of the Octopus tank
Шойгу счел необходимым построить в России еще несколько крупных городов
The State Duma appreciated the idea of banning the sale of grenades after the shooting at the MFC in Moscow
British military demanded $1.1 million for stuttering after Estonian frosts
Sasapost (Египет): американцы создают самый мощный лазер в истории. Что это значит?
Tank killer: the work of the PTKM-1R anti-roof mine was shown on video
Корпорация "Иркут" до конца 2018 года поставит ВКС РФ более 30 истребителей Су-30СМ
other topics discussed
2006-2021 © ВПК.name. All rights reserved.
When reprinting, link to ВПК.name required.
User agreement.
№ 21-PP in the register of information distributors.
18+
Website hosting: TimeWeb.