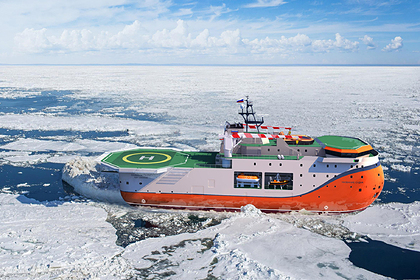 The self-propelled Arctic platform "North pole" of project 00903, launched in December by the Admiralty shipyard in St. Petersburg, has an "egg-shaped" shape and does not look beautiful, according to The Drive.

"The new Russian Arctic research vessel may become the ugliest ship of all that we have seen," writes the American edition.

The publication notes that the vessel built for $ 100 million for Roshydromet is necessary for Arctic research, in particular, to provide long-term Autonomous missions in high latitudes.

The publication assures that, in addition to civilian purposes, the ship will be able to solve other tasks. The Drive admits that the "North pole", in particular, can be used for deep-sea research in the interests of the Russian Navy (Navy), as well as geological exploration.

In September, the American magazine Popular Mechanics called the Polish m-15 Belphegor the most "ugly" in the world.