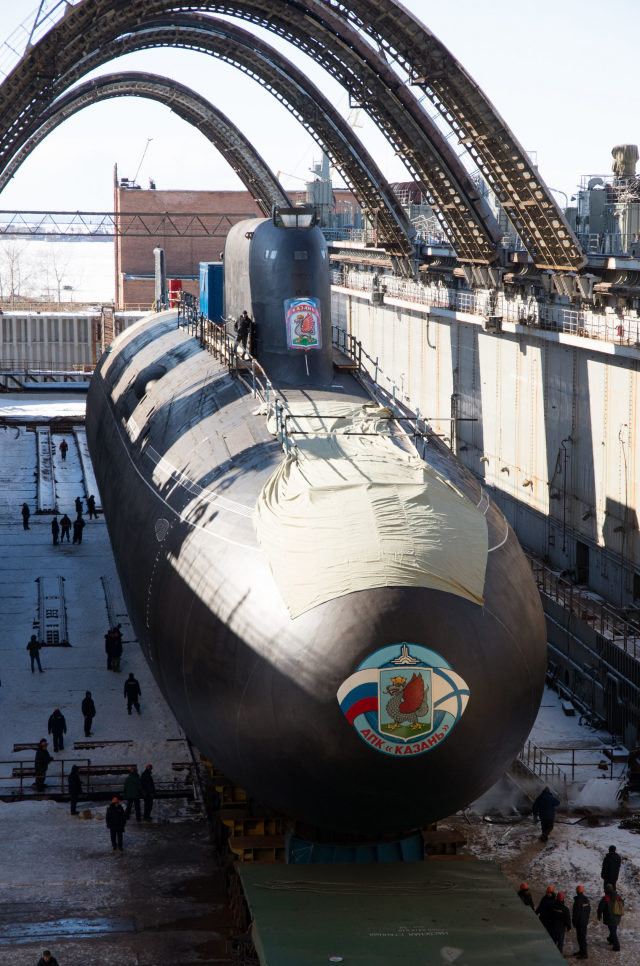 MOSCOW, December 9. /TASS/. The Kazan 885m nuclear submarine will complete all state tests by the end of the year. This was stated in an interview with the newspaper "Red star" commander of the Northern fleet, Vice Admiral Alexander Moiseev.

"By the end of the year, it is planned to complete state tests of the nuclear-powered submarine Kazan, which will also be part of one of the fleet's formations," he said.

The Vice Admiral said that the Northern fleet is now actively replenished with ships and submarines of the 4th generation. "Only this year, the newest strategic missile submarine of the Borey-A project, Knyaz Vladimir, and the first serial frigate of the 22350 project, Admiral of the fleet Kasatonov, have entered the combat system of the Northern fleet," Moiseev said.

The lead nuclear submarine of project 885m (Yasen-M) Kazan was laid down on July 24, 2009, launched on March 31, 2017, and is currently undergoing testing. The main armament of project 885/885M submarines is Kalibr-PL and/ or Onyx missiles.

The project 22350 frigate Admiral Golovko is scheduled to join the Northern fleet by the end of next year, Alexander Moiseev said.

"In may of this year, another frigate of project 22350, Admiral Golovko, was launched at Severnaya Verf. It is expected that by the end of 2021, it will become part of the fleet and become the third frigate of this project, " he said.

He stressed that this will significantly increase the combat capabilities of the naval forces of the fleet and coastal groups.

Currently, the fleet is served by the lead frigate of project 22350 "Admiral Gorshkov" and the first serial - "Admiral Kasatonov". The main armament of the ships is 16 universal launchers capable of using Kalibr, Onyx and Zircon cruise missiles. The second serial frigate "Admiral Golovko" is being tested. Five more frigates of the project are under construction at the Northern shipyard in St. Petersburg. Thus, to date, the total number of accepted and under construction ships of project 22350 has reached eight.

"The fleet's tank units have already been fully re-equipped with modern T-80BVM tanks adapted for operation in the low temperatures of the Far North and the Arctic," he said.

According to him, equipping the Armed forces of the Russian Federation with the latest weapons that ensure the parry of modern threats is one of the main tasks. "The Northern fleet in this direction is no exception," the commander stressed.

The t-80BVM tank is an upgraded version of the t-80BV OBT. During the modernization of the vehicle, the main combat qualities were improved - firepower, security and mobility, as well as the control system was improved, as a result of which the tank began to meet modern requirements in all basic parameters.

The rights to this material belong to ТАСС
The material is placed by the copyright holder in the public domain
Страны
Россия
Продукция
Club-S
Адмирал Горшков
Казань АПЛ
Князь Владимир
П-800 Оникс
Т-80
Т-80БВМ
Циркон-С 3М22
Компании
Минoбороны РФ
Северная верфь
Проекты
22350
885 Ясень
955 Борей
Арктика
Калибр КР
СФ
Do you want to leave a comment? Register and/or Log in
Log in via Facebook
The Permanent Representative of the Russian Federation to international organizations in Vienna Ulyanov called the refusal of AUKUS to provide data on the union abnormal
The United States agrees with Stoltenberg on the inadmissibility of Russia's influence in the issue of NATO expansion
In the USA, they were surprised by the size of the Su-75
The National Interest (США): российский танк Т-80 — это не шутка
Korean aircraft carrier "won back" funding
Шойгу счел необходимым построить в России еще несколько крупных городов
The State Duma appreciated the idea of banning the sale of grenades after the shooting at the MFC in Moscow
British military demanded $1.1 million for stuttering after Estonian frosts
Sasapost (Египет): американцы создают самый мощный лазер в истории. Что это значит?
Tank killer: the work of the PTKM-1R anti-roof mine was shown on video
Корпорация "Иркут" до конца 2018 года поставит ВКС РФ более 30 истребителей Су-30СМ
Как России зарабатывать больше на продаже вооружений
Putin signed the law on the powers of Roscosmos in the field of infrastructure construction
In the USA, they called the advantages of the Russian "Sun"
Американский эксперт назвал пять мощнейших российских танков
other topics discussed
2006-2021 © ВПК.name. All rights reserved.
When reprinting, link to ВПК.name required.
User agreement.
№ 21-PP in the register of information distributors.
18+
Website hosting: TimeWeb.