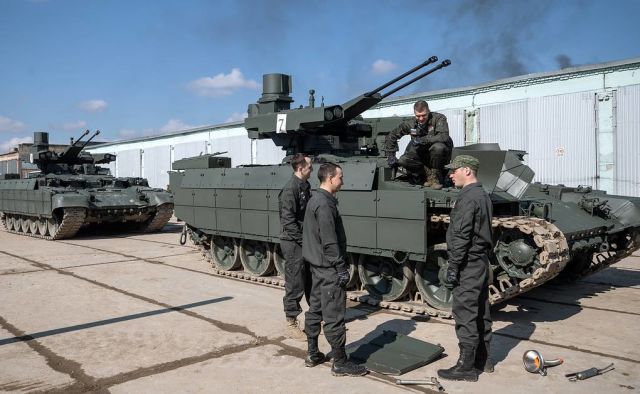 The personnel of the division's re-equipped motorized rifle units are being retrained to work on new equipment, Colonel-General Alexander Lapin said

YEKATERINBURG, December 1. /TASS/. The first batch of eight tank support vehicles (BMPT) "Terminator" entered the tests in the tank division of the Central military district (CVO), stationed in the Chelyabinsk region. This was reported to journalists by the commander of the district's troops, Colonel-General Alexander Lapin.

"A batch of eight Terminator BMPs entered the guards tank division of the Central military DISTRICT for trial operation. Currently, the personnel of the division's re-equipped motorized rifle units are being retrained to work on new equipment, " Lapin said.

The press service of the Central military DISTRICT clarified that the use of BMPT in combat formations can significantly increase the combat capabilities of tanks and their survivability on the battlefield. The crews of the Terminators have already been selected and formed. Representatives of the plant introduce military personnel to the combat capabilities of these vehicles, as well as their driving characteristics.

The Terminator BMPT is based on the T-90 tank. It is armed with two 30 mm guns, a heavy machine gun, and an anti-tank complex "Ataka-T". The crew is five people. The BMPT was put into service in April 2018. In the same year, the first batch of 10 such vehicles was delivered to the troops.