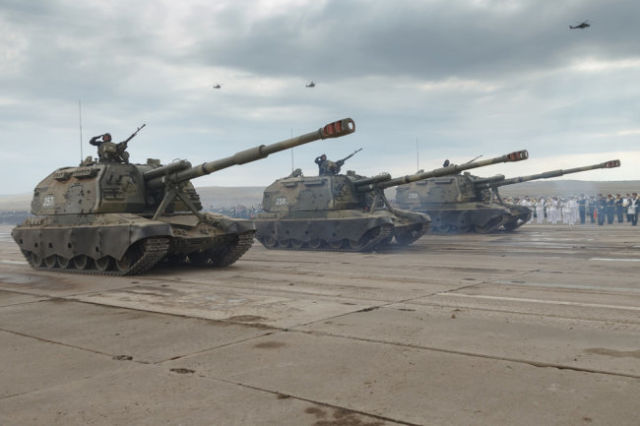 TSAMTO, November 19. On the day of rocket troops and artillery, units of the 150th motorized rifle division of the southern military district (SE) in the Rostov region mastered the upgraded 2s19m2 "Msta-S" self-propelled howitzers.

Calculations of combat vehicles were handed symbolic keys to the new equipment, after which the driver-mechanics performed a control run of howitzers on the combined-arms range.

A fundamentally new computer-based artillery range is a complex of special software and hardware designed for training with artillery and missile units.

The new system allows you to conduct classes and training in shooting and controlling all types of fire, implementing any method of firing with a different combination of weapons in real time. This takes into account the degree of destruction of the target and assesses the effectiveness of the assigned combat task. The virtual polygon also allows you to simulate fire day and night on all types of terrain, recreate any real terrain using data from electronic topographic maps.

In total, about 20 self-propelled artillery units were involved in combat training activities, and about 50 military personnel from the southern military DISTRICT's artillery units took part.

The upgraded 152-mm self-propelled howitzers 2S19M2 "Msta-S" improved the rate of fire, it is brought to 10 rounds / min., and also increased the accuracy of targeting. Howitzers are equipped with complexes of command control vehicles with an automated gun guidance control system. In the tower of the installation, a ballistic computer, topography and orientation equipment using GLONASS and GPS are installed, the press service of the southern military district reports.