A real monster: a 140-mm gun for the Leopard 2 amazing for its size 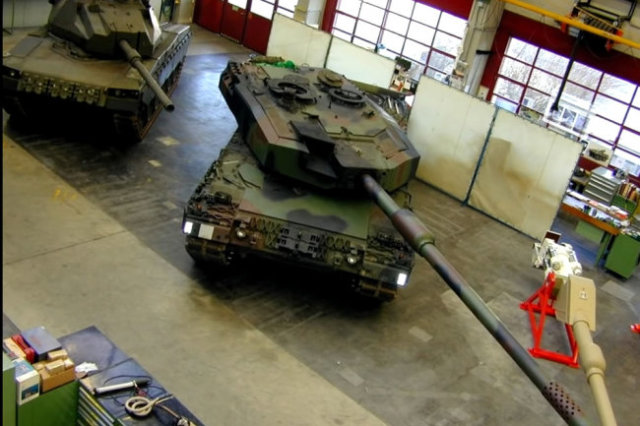 For tanks Leopard 2 in Switzerland in the late 80's created a powerful 140-mm gun. It still surprises with its characteristics and size.

Many data about it have not yet been made public, but even from the published photographic materials, it can be understood that the length of this weapon significantly exceeds those already in service.

It was reported that during the tests it was possible to break through an armored plate with a thickness of one meter. It was emphasized that this result was achieved using a projectile that did not use a depleted uranium core.

Since the ammunition dimensions were larger than the regular ones, they were made separate for ease of handling.

The gun was installed in a real Leopard 2 tank and successfully passed the test, but the designers did not take into account the political situation of the early 90's, when, due to the dissolution of the Warsaw Pact and the collapse of the Soviet Union, potential buyers no longer wanted to spend money on re-equipment of armored vehicles. Therefore, there were no orders. The Swiss army was not interested in the project either.

A peculiar echo of this in many ways interesting development is a test stand located in one of the museums, created on the chassis of the main battle tank Panzer 68.

Given that Western designers have not abandoned the idea of creating new weapons, the experience gained may still be useful in the near future.

140 mm cannon on the Leopard 2. pic.twitter.com/9cTJpHFMt1

The rights to this material belong to Российская газета
The material is placed by the copyright holder in the public domain
Страны
Польша
Швейцария
Продукция
Leopard-2
Do you want to leave a comment? Register and/or Log in
Log in via Facebook
Шойгу счел необходимым построить в России еще несколько крупных городов
Россия получит авиационное преимущество над ЕС и США
In the USA, they were surprised by the size of the Su-75
Ukraine has upgraded the commander's tank
The Ministry of Defense of the Russian Federation is preparing to adopt a new "Shell" and a fighter drone "Derivation"
Russia has collected archival information about the service and life of all generals from 1917 to 2020
Так ли все плохо с Тихоокеанским флотом
How to return the US fear of Russian Naval aviation
«Концепция сетецентрической войны родилась в СССР, а развитие получила в США"
French special forces are preparing to fly on "jet skates"
США оставили биологическое оружие Талибану
The Permanent Representative of the Russian Federation to international organizations in Vienna Ulyanov called the refusal of AUKUS to provide data on the union abnormal
The United States admitted that they dropped the fuel tank from the F-16 aircraft on a Japanese village due to an emergency situation
«Бастион» для «Циркона». Куда приземлят гиперзвуковую ракету
Доездился: Илону Маску грозит финансовый крах
other topics discussed
2006-2021 © ВПК.name. All rights reserved.
When reprinting, link to ВПК.name required.
User agreement.
№ 21-PP in the register of information distributors.
18+
Website hosting: TimeWeb.