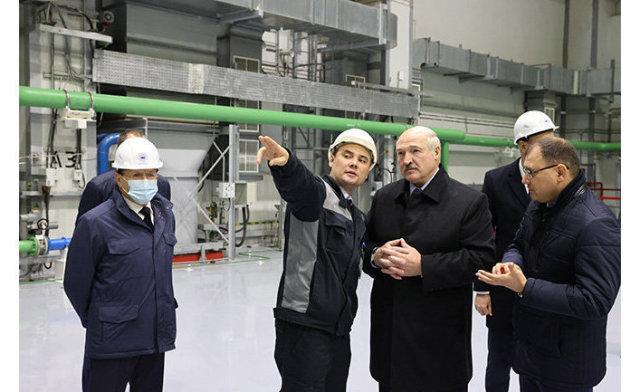 Alexander Lukashenko opened the belaes In Ostrovets on Saturday, November 7. "A historic moment: the country becomes a nuclear power," he said. The author recalls that in early September, the Baltic States agreed that after the launch of the nuclear power plant in Ostrovets, they would stop buying electricity from Belarus.

Alexander Lukashenko opened the belaes In Ostrovets on Saturday, November 7. "Everything is so everyday, as if the metro was built. Historical moment: the country becomes a nuclear power, " he said.

At the Belaes training center, Lukashenko was informed about the progress of the plant's commissioning and integration into the country's economy, the prospects for cooperation between Rosatom and Belarus in the field of nuclear energy, science and technology, and the implementation of a comprehensive plan for the region's nuclear power plant construction.

According to Karankevich, the Belarusian NPP will produce about 18 billion kWh annually. The launch of the nuclear power plant will replace about 4.5 billion cubic meters of natural gas per year. The currency burden on the budget will be reduced by more than $ 500 million. Greenhouse gas emissions will decrease by more than 7 million tons per year. "The service life of the station is 60 years with the possibility of extending it to 100 years," the Minister added. In total, more than 2.5 thousand people will work at belaes, about 60 of them are specialists from Russia and Ukraine with experience working at nuclear power plants.

Alexander Lukashenko discussed the prospects of cooperation with the Russian side in the field of nuclear energy with Rosatom CEO Alexey Likhachev, and suggested creating a subsidiary of the Russian state Corporation in Belarus. They also touched upon the possible construction of additional reactors at the belaes And the launch of energy-intensive production facilities in the region. In addition, Rosatom, together with the Kurchatov Institute, offers the National Academy of Sciences to create a research reactor.

Among the priority areas is connecting the housing stock to electricity for heating and hot water supply. "I have made all the decisions - we are now overwhelmingly converting housing to electricity. We have adopted a corresponding program, " Lukashenka reminded.

Then Alexander Lukashenko gave permission to increase the electric capacity of the power unit (up to 400 MW) in accordance with the stage program.

More than 22 million kWh of electricity was released from the Belaes in the three days since it was incorporated into the unified power system, which saved 6.4 million cubic meters of natural gas in the amount of about us $ 1 million. This was stated by the Ministry of energy. Electricity from the nuclear power plant is supplied to all regions of the country.

The power start-up was preceded by a large amount of work: checking the readiness of technological systems and equipment for the stages of development of thermal and electric power, conducting the necessary tests, and training personnel.

After that, speaking at a rally in front of the staff and builders of Belaes, Alexander Lukashenko said that the Belarusian nuclear power plant is a new step in the future, to ensure the energy security of the state: "Here, at the first power unit, we will produce about 20% of the country's total electricity demand. The work of the second block will give us the same amount. Further - more. The launch of the station will serve as an impulse to attract the most advanced technologies to the country. And not only in the energy sector. But also in the development of electric transport, the creation of new electric-intensive industries, innovative areas in science and education."

Recall that yesterday, when opening the third metro line, Alexander Lukashenko " answered those who are worried about an overabundance of electricity." He was quoted by a telegram channel close to the press service.

"There will be plenty of electricity. Our protestors are crying that there is nowhere to put it. Listen, how do you have nowhere to put electricity? We still need to build one such station to get away from dependence on hydrocarbons. This is happiness, a gift."

Recall that Belarus is building a nuclear power plant near Ostrovets in the Grodno region at the expense of the Russian state loan for the Russian VVER-1200 project. The station will consist of two power units with a total capacity of 2.4 thousand MW. The NPP will be able to produce 18 billion kWh of electricity per year.

On August 7, the first power unit of the Belarusian NPP started loading nuclear fuel. On October 11, a chain reaction was started: the reactor became operational.

Back in early September, the Baltic States agreed that after the launch of the nuclear power plant in Ostrovets, they would stop buying electricity from Belarus.

On November 3, the first power unit of the belaes Was included in the unified energy system of the country, Lithuania immediately announced the termination of electricity supplies from Belarus.

The rights to this material belong to ИноСМИ
The material is placed by the copyright holder in the public domain
Original publication
InoSMI materials contain ratings exclusively from foreign media and do not reflect the editorial board's position ВПК.name
Кредитование
Страны
Белоруссия
Литва
Россия
США
Украина
Компании
Курчатовский институт
Росатом
Проекты
Ядерный щит
ЯЭУ
Do you want to leave a comment? Register and/or Log in
Log in via Facebook
In the USA, they were surprised by the size of the Su-75
Шойгу счел необходимым построить в России еще несколько крупных городов
Россия получит авиационное преимущество над ЕС и США
Ukraine has upgraded the commander's tank
The Ministry of Defense of the Russian Federation is preparing to adopt a new "Shell" and a fighter drone "Derivation"
Russia has collected archival information about the service and life of all generals from 1917 to 2020
Так ли все плохо с Тихоокеанским флотом
How to return the US fear of Russian Naval aviation
«Концепция сетецентрической войны родилась в СССР, а развитие получила в США"
French special forces are preparing to fly on "jet skates"
США оставили биологическое оружие Талибану
The Permanent Representative of the Russian Federation to international organizations in Vienna Ulyanov called the refusal of AUKUS to provide data on the union abnormal
The United States admitted that they dropped the fuel tank from the F-16 aircraft on a Japanese village due to an emergency situation
«Бастион» для «Циркона». Куда приземлят гиперзвуковую ракету
Доездился: Илону Маску грозит финансовый крах
other topics discussed
2006-2021 © ВПК.name. All rights reserved.
When reprinting, link to ВПК.name required.
User agreement.
№ 21-PP in the register of information distributors.
18+
Website hosting: TimeWeb.