How can Russia deprive Ukraine of support from space 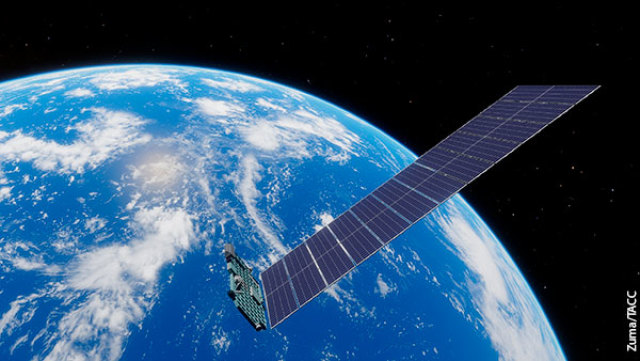 Commercial satellites that help Ukraine fight can become "a legitimate target for retaliatory defeat," the Russian Foreign Ministry says. How did it happen that purely civilian vehicles began to be used for military purposes, what would happen if Russia really starts destroying them, and what could be the technological response of the Russian military to this challenge?Just a few years ago, about a thousand active spacecraft were operating in orbit and their number was gradually increasing by several dozen per year.

However, about five years ago there was a technological breakthrough that allowed the United States and then China to dramatically increase their satellite groupings. The number of satellites began to grow rapidly.

As of January 1, 2022, 4852 spacecraft were already operating in space. At the same time, 2,944 of them belonged to the United States, about 500 to China and 160 to the Russian Federation. Only in the incomplete year 2022, their number has increased by almost 2,000 more. In fact, we are looking at the results of a kind of cosmic revolution.

The basis for such a sharp increase in operating satellites were large space groupings owned by commercial companies. Basically, these are devices for providing communication services, broadband Internet access and remote sensing of the Earth (remote sensing).

Time for large groupingsThe largest of them is the global Starlink satellite system from SpaceX to provide high–speed broadband Internet access.

Elon Musk's main competitors, OneWeb, have 428 operating spacecraft in orbit. Further – less. Of the significant ones, I would like to name two private companies providing remote sensing data, Planet Labs has about 150 active satellites, and Maxar Technologies has from 80 to 100.

The orbits of many of these satellites (both military and commercial) pass over the territory of Russia and over the territory of Ukraine. They take photos, receive images in a variety of ranges, and are engaged in radar sensing. The photos are sent to Earth, processed and used. In particular, they are bought by the military for their own purposes. All space powers are engaged in such satellite reconnaissance.

The special military operation in Ukraine has shown that satellite reconnaissance, the use of satellite communications and control using spacecraft are extremely effective. They allow you to get a serious tactical advantage over the enemy. The most important are the speed of obtaining operational information, its processing and the ability to bring it to the performers. The ability to track almost every piece of equipment, to receive information about enemy aircraft literally immediately after takeoff.

Starlink has become a lifesaver for the Ukrainian military. The ability to have a full-fledged connection anywhere, on a moving car or ship is almost priceless.

At the same time, both military spacecraft and hundreds of civilians work for the United States and, accordingly, for NATO. For many companies engaged in remote sensing of the Earth, the US Department of Defense has long been the main customer. At the same time, it is impossible to control which satellite transmits the information and who is its recipient. It is clear where it goes, but it will not be possible to prove anything, technically it is impossible.

This is the new cosmic reality of our world. There will be more and more spacecraft, and data from them will arrive faster and faster. These satellites, strictly speaking, are not weapons, but they dramatically increase the effectiveness of using real weapons on the battlefield. In the modern world, the highest fence is not enough to hide a secret military unit, everything will be perfectly visible from above.

Prohibition of useAnd now the Russian Foreign Ministry has made a special statement about the satellite data: "We confirm that such a quasi-civilian infrastructure, if used in military operations against Russia, can quite logically become a legitimate target for retaliatory defeat."

This situation is most reminiscent of attempts to cut the enemy's sea communications. This has already happened, both during the First and Second World Wars. Then, too, the attack was carried out, including on commercial civil vessels exclusively on the principle of state affiliation.

The logic is about the same: a civilian vessel can carry out military tasks – to transport weapons or military. True, at that moment there was a full-fledged world war, and an attempt to shoot down an enemy spacecraft could easily become just such a cassis belli for its beginning.

But the main problem is different. Hunting enemy transports, in addition to their destruction, forced the enemy to complicate logistics, lay new less convenient and longer routes, tear off warships to provide security. In the case of a satellite, the destruction of one of them will not stop and will practically not affect the work of the others.

And the only purely military and most radical option to eliminate this threat is the massive destruction of satellites in orbit. Russia – and some other countries – have the technical capabilities for this. However, the implementation of such a scenario will inevitably lead to long-term contamination of the most popular orbits with debris from destroyed spacecraft. And also, most likely, it will thin out and destroy both the Russian satellite grouping and, for example, the Chinese one. This will also destroy two orbital stations operating in space – the international ISS and the Chinese Tiangong.

Naturally, at the same time, humanity will lose satellite communications, television, high-quality meteorology, navigation and many other vital services and services that we have become accustomed to over the past decades. At the same time, humanity does not yet have the technology to effectively clean up space debris, so space may be closed for tens or even hundreds of years.

Do the same thing yourselfWhat can Russia do in such a situation?

It is clear that no state will voluntarily give up such a space advantage in technology. And he will not sign any agreement on the limitation of such civilian technologies with convenient military use either.

The Foreign Ministry refers in its statement to the 1967 Outer Space Treaty, which was signed by most states, but there is nothing there that could prohibit the direct use of spacecraft. Article 4 states that "the States parties to the Treaty undertake not to put into orbit around the Earth any objects with nuclear weapons or any other types of weapons of mass destruction, not to install such weapons on celestial bodies and not to place such weapons in outer space in any other way."

So this is not happening, no weapons of mass destruction are being launched into space, thank God, so far no one is taking them out. It's just that space exploration has become the most effective military tool.

It is unlikely that the Russian-Chinese draft "Treaty on the Prevention of the Deployment of Weapons in Outer Space, the Use of Force or the Threat of Force against Space Objects" will help in this situation. In the current situation, only a technological leader could push it from above, and so far it is completely unprofitable for the United States.

Thus, the second option looks like a really workable way to counter Western reconnaissance satellites – to build up your own satellite grouping, both public and private. To become space leaders themselves in conditions when orbital groupings have become the basis of modern space. Apparently, Roscosmos and the Russian Ministry of Defense understand this situation well.

Recently, the head of Roscosmos, Yuri Borisov, said that the main goal of Russian cosmonautics is the transition to mass and in–line assembly of spacecraft, the production of at least 200 satellites per year by 2026. The Ministry of Defense is also replenishing the satellite grouping with maximum speed – three successful military launches from the Plesetsk cosmodrome have already been made this month alone. I would like to hope that further "Star Wars" will be conducted in this "production key".