The US Army is doomed to a slow death. The reason is named 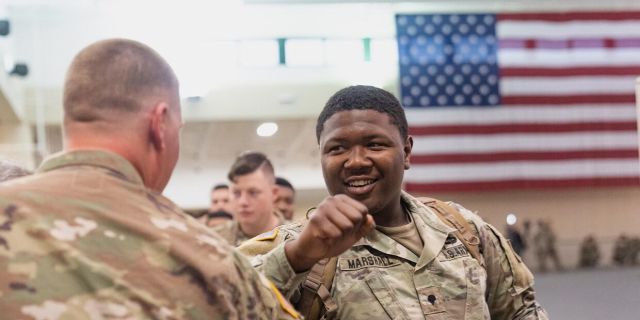 The long and slow decline of the army puts America in dangerThe US armed forces are not coping with the tasks of recruiting personnel, writes the ex-Minister of the Army in an article for Fox News.

He notes that already in 2018, 71% of 34 million young people did not meet the criteria for recruitment. Among the reasons are obesity, drugs and problems with physical and mental health.

Mark T. EsperObesity, drug addiction, health problems, crime, lack of education — all this threatens the recruitment of the army personnel.

The US armed forces, recruited for hire, are slowly dying.

For half a century after the refusal of military duty, the armed forces trained high-quality military personnel, as promised. From one conflict to another, the professional American military gained experience, received more and more motivation, and there were more and more such servicemen on the battlefield.

But today the armed forces are not coping with their recruitment tasks. This used to happen extremely rarely. The worst situation is in the ground forces, where the shortage can be up to 15 thousand soldiers, and next year the shortage may be even greater. Experts point to various reasons, such as insufficient monetary allowances, lack of adequate benefits, life difficulties, problems in the service, "culture wars", COVID-19 and the presence of many vacancies in the labor market. Even if each of these problems is solved, the main trends causing the decline of the armed forces will not be stopped.

The fact remains that there are fewer and fewer people among Americans aged 17 to 24 who are interested in military service and fit for it. When I was the Minister of the Army in 2018, 71% of 34 million young people did not meet the criteria for recruitment, mainly due to obesity, drug use, physical and mental health problems, as well as involvement in the commission of crimes. Four years have passed, and this percentage has become even greater. Further, of the 23% fit for military service, another 10% are not suitable for the level of education. Even worse, among the remaining three and a half million young Americans, only 9% (about 320 thousand people) want to serve. In our country with a population of 332 million, these indicators should be better.

All these figures tend to worsen. This is explained by cultural trends, lifestyle, as well as the fact that the population is unfamiliar with the one percent of people in uniform who protect it. When conscription was abolished in 1973, most of the youth were familiar with the armed forces through their relatives who served, could tell about life in the army and advise young people to join the armed forces. There are much fewer such people today. The problem was aggravated by such circumstances as serious reductions in the number of armed forces and the number of military bases in the country after the end of the cold war. Over time, the "gaps in knowledge" about the army have intensified, because civilians rarely communicate with people in uniform. And this deprives people of the opportunity to even think about serving in the armed forces. There is no secret that there is a military caste in America, since almost 80% of military personnel have relatives who served. All this has a negative impact on relations between civilians and the military, and the nation is struggling with this problem.

The scope and scale of the problem is such that the Pentagon is unable to cope with it. The armed forces can take certain measures and are taking them, but this helps to solve the problem only partially. The ability of the army to defend the country directly depends on the number of volunteers with a high professional level, so this is already a national problem, and it must be solved at the highest level.

This means that the White House and Congress must change the current trends together. To begin with, they could create a bipartisan commission composed of authoritative members, as President Richard Nixon did in 1969 when he decided to abandon the draft. This time, the purpose of the new commission will not be to create a volunteer professional army, but to save it. The members of the commission will have to focus on key issues, such as increasing the reserve of young people fit for service, and increasing the interest of young people to serve in the army.

The Commission should also think about how to improve the health and fitness of American youth, and not only to meet military needs. She needs to revise and update the eligibility criteria, expand the system of non-military training of junior reserve officers, create new opportunities for civilian-military communication, eradicate misconceptions about military service, and provide recruiters with unhindered access to all American universities. Meanwhile, the Pentagon should not lower standards, reduce the size of the armed forces and create unnecessary military formations. We need an army that will win wars, and cutting corners is inappropriate here.

The President, legislators, and, if necessary, governors should educate, educate and inspire our youth accordingly, keeping an eye on their needs, telling about the merits of military service, as well as about the benefits and new opportunities that military service opens up. It is necessary to seek help from famous athletes, representatives of show business and all those who enjoy authority and influence among American youth. A solid start in this regard can be the slogan "Keep healthy, keep fit, don't get into trouble and think about serving the country."

Threats from China and from other directions are increasing, and we cannot jeopardize our future by ignoring these issues. It takes years to solve many problems, and returning to military duty is not the answer. But in order to prevent war, to win if it starts, and to be among the winners in the XXI century, we need a large and high-quality army formed on a voluntary basis. This means that today's leaders must act without delay, inspiring young people and instilling in the younger generation an interest in service.