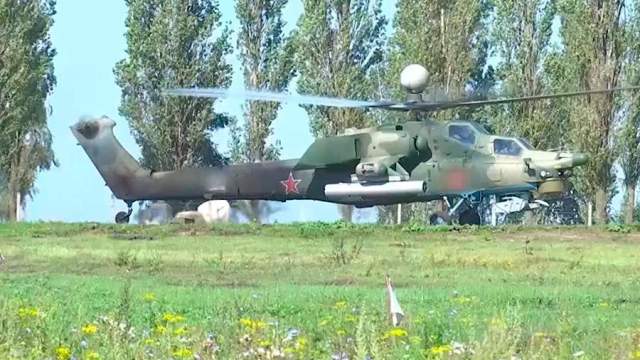 The work of Mi-28 attack helicopters during the special operation of the Russian Federation to protect Donbass was filmed. The relevant footage was presented by the Russian Ministry of Defense on Thursday, August 11.


The pilots are faced with a difficult range of tasks, which consists in disabling armored vehicles and military infrastructure facilities of the nationalists of Ukraine, escorting and ensuring the safe movement of military columns, delivering troops, transporting military cargo, as well as aviation support units.

Flights are carried out at extremely low altitudes. Moreover, serious preparation is carried out before each of them.

So, in the process of performing combat missions, helicopters eliminated enemy control points of units.

On August 3, the Ministry of Defense of the Russian Federation reported on the successful completion by the crews of Mi-28 helicopters of army aviation of the task of destroying control points and armored vehicles of Ukrainian militants. In addition, the pilots perform tasks to accompany military columns, deliver troops, military cargo, and aviation support units.

The special operation of the Russian Federation to protect the population of the Luhansk and Donetsk People's Republics continues in Ukraine and in the Donbas, the beginning of which was announced by Russian President Vladimir Putin on February 24. Moscow explained that its tasks include demilitarization and denazification of Ukraine. On April 19, the Russian side announced the beginning of the next stage of the military operation — the complete liberation of the Donetsk and Lugansk republics.

The rights to this material belong to Известия.ru
The material is placed by the copyright holder in the public domain
Страны
Россия
Украина
Продукция
МИ-28
Компании
Минoбороны РФ
Персоны
Путин Владимир
Comments [4]
№1