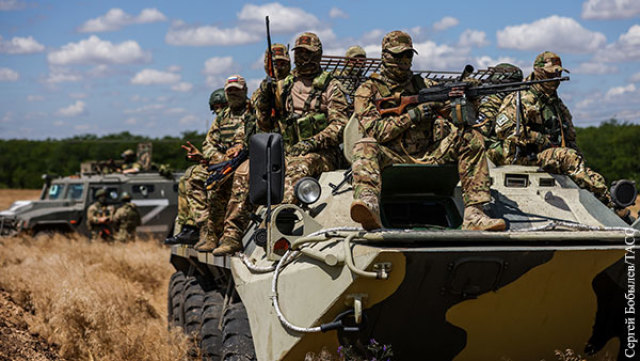 The special operation taking place in Ukraine is the main source of information stories of recent months – especially for bloggers and other non-systemic online public, often amateurishly assessing events in Ukraine. In this environment, frankly mythical assumptions about the situation in the combat zone are generated. Undergoing various mutations as the discussion progresses, generating new considerations, they form an information field that is sometimes loosely connected with reality. This is how myths about a special operation are born. Let's list a few of the most common.

1. Why the shelling of peaceful cities of Donbass continues

One of the most common is the myth that Russian troops cannot (do not want to) fight against enemy artillery, which is shelling residential areas of the LDPR. The media describe the consequences of the strikes in detail and in colors on a daily basis. This causes people to naturally protest and misunderstand why the Russian army cannot stop such strikes. "Military experts" are beginning to give out their conjectures that our army is allegedly unable to effectively conduct a counter-battery fight.

However, the real problem is different. As you know, the Armed Forces of Ukraine strive to maximize the use of residential and industrial development of settlements. This is their meaningful strategy from the very beginning of hostilities. Another confirmation of such a manner of action was the scandalous investigation of Amnesty International, which so outraged Kiev.

Guns, mostly towed, as well as MLRS are installed near residential buildings. At the same time, residents are forbidden to leave them. It is especially dangerous when the APU is used to cover high-rise buildings. After completing the firing task (it can be from 5-10 to 20 volleys), the APU battery is rolled up and moved to another point, usually also in the residential area. The total duration of the gun at the firing point can be from five to seven to 20 minutes.

It would seem that this is a big time. The Russian army has, for example, an artillery reconnaissance complex "Zoo", capable of determining the location of the gun that fired it by the trajectory of the projectile, but with some error. Such data is enough to strike back in just a few minutes, which is done if such a weapon is located outside of residential development. But if it stands in the courtyard of a residential area surrounded by high-rise buildings or in a densely built-up private sector, then the location errors of this weapon already cover several houses that fall into the affected area. To this must be added the technical dispersion of the shells of the gun, which increases with wear. And our artillery is firing very intensively.

Thus, an attempt to destroy an enemy gun in a residential area with a retaliatory artillery or missile strike is highly likely to lead to large civilian casualties and the destruction of residential infrastructure. And such guns in these conditions must be destroyed at least a few. And the expected civilian casualties from such a counter-battery struggle may amount to hundreds of people.

In other words, for the rescue of several people in Donetsk, hundreds of lives will have to be sacrificed in another city of the Donetsk Republic. The APU is being covered by civilians as a human shield – and this tactic, admittedly, works.

You can use aviation, especially since Russia has achieved air supremacy over the combat area. An ATGM strike from a helicopter with a combat cumulative warhead of only 5-9 kg will guarantee to destroy the gun without damaging residential buildings. However, the time factor comes into play here. Helicopters and airplanes cannot stay in the air for a long time, especially in an area where they are threatened by MANPADS. Therefore, they either patrol in safe areas or are at the airfield ready for departure.

The time to reach the point of impact of an aircraft or helicopter in the air can vary greatly and, according to the experience of American aviation, can range from 15 to 30 minutes. And even more from the airfield – from 30 to 50 minutes or more, depending on the remoteness of the base area from the place of impact. During this time, the enemy manages in most cases to change the position of even towed guns.

Of course, there is a chance to find the enemy's gun in the position before he managed to leave it or on the march to another area. Our troops successfully destroy enemy artillery outside residential or industrial buildings. But it's impossible to do it quickly. The AFU still has a large amount of artillery. NATO also contributes. Therefore, a difficult and systematic struggle is being waged. This struggle has already brought its successes – according to the Ukrainian side, Russia has more than a dozen of its own for every Ukrainian barrel. But at the time of the start of the special operation, we had parity in the number of artillery weapons in the first-line troops.

2. Why is the Ukrainian artillery not completely suppressed

Another myth is that the Ukrainian artillery, although small in number, is used more effectively than the Russian one. This statement is shattered by the very fact that at the moment we have more than tenfold superiority in artillery.

And this despite the fact that initially both armies, both Russian and Ukrainian, had about the same amount of artillery. At the time of the start of the special operation, the AFU had a full–fledged grouping with a full set of counter-battery fighting equipment and trained personnel - however, as a result, at the moment this grouping completely lost the battle for fire superiority.

What kind of superiority in the effectiveness of the use of artillery of the Armed Forces of Ukraine can we talk about now, when they do not have in the least acceptable amount of means of counter-battery warfare and trained personnel? And shooting at peaceful cities is just evidence of weakness. In addition to the desire to implement scorched earth tactics, shooting at civilian objects may indicate that the AFU has no opportunity to issue target designation of its artillery to enemy troops.

Another myth is that the Russian army is unable to carry out deep tank breakthroughs due to the presence of a powerful anti-tank defense in the enemy. It is worth recalling here that a tank is a weapon designed for fighting mainly in open spaces. No wonder there is such a thing as "tank-dangerous" or "tank-accessible" terrain. Dense urban development is not one of them.

During the Great Patriotic War, our tank commanders avoided fighting in the city. And tank breakthroughs took place on the ground outside settlements with the overcoming of the enemy's field defense lines. In cities, tanks were used together with infantry as a means of its fire reinforcement.

This is how tanks are used today within the framework of their own. After all, the area of hostilities in the LDPR is actually a zone of continuous industrial and residential development. As for the breakthroughs, they were in the initial phase of the operation, when our troops reached the Kiev–Kherson line in a few days. However, the need to eliminate the main forces of the Armed Forces of Ukraine, entrenched in the western regions of the LDPR, forced us to focus our main efforts on solving this problem.

It is worth recalling here that in this region the Armed Forces of Ukraine have created a grouping of about 150 thousand people. It is worth recalling that Paulus had a group of 330 thousand people surrounded near Stalingrad – quite comparable to what Ukraine had in the LDNR. During the liquidation of the 6th Wehrmacht Army in the city, tanks were also not very actively used, since infantry and artillery played the main role.

4. What is the real role of artillery on the battlefield

It is possible to meet the opinion that SVO takes us back to the times of the First World War, when the main role on the battlefields was played by artillery. Formally, this is true, but in fact it is not. The Russian army has huge stocks of ammunition left over from the Soviet era. Their massive use is fully justified. Moreover, the main objectives are areal objects such as areas of concentration of troops. At the same time, the use of extremely expensive weapons – high–precision systems of different ranges - in such conditions is not entirely appropriate, given that there is no serious opposition to our artillery and aviation from the AFU.

5. How to assess the role of aviation

There is a myth about the low intensity of the use of Russian aviation due to the threat of the AFU air defense, which has retained its combat capability, in particular, MANPADS. In fact, the intensity of the use of aviation is not at all low. The data of the Ministry of Defense indicate the defeat of 50-60 to 100-120 or more objects by the forces of operational (formerly front-line) and army aviation. If we assume that a pair of cars was allocated for each target (and there can be no less, a pair is the minimum tactical unit of aviation), then

from 100-120 to 200-240 sorties and more are carried out daily (after all, a much larger outfit of forces is allocated for a number of large targets than a couple) of airplanes and helicopters.

According to the experience of the use of US aviation in various conflicts, during systematic combat operations, one aircraft has an average of one flight per day. If the VKS of the Russian Federation act in a similar way, it turns out that about 200 aircraft and helicopters are involved and fully used in its operation. This is a considerable part of the total combat strength of Russian aviation. So aviation is fully used, and the air defense of Ukraine does not interfere with this. Even helicopters are successfully operating, which indicates that the American "Stingers" cannot resist them, which could force them to abandon the use of these machines.

There is a myth about Russia's insufficient use of bomber aircraft. It is claimed that our aviation cannot use free-fall bombs because of the threat of enemy air defenses.

In fact, it may well be. Moreover, some of our aircraft have a system that allows bombing with high accuracy, achieving the accuracy of hitting the designated point with free-fall bombs with a deviation of 50-100 meters of standard deviation. We also have planes that can easily wipe out a small or even an average city in one strike by a group of 10-30 cars. These are strategic (Tu-160) and long-range aircraft (Tu-22m3). However, by destroying the enemy, we will destroy the entire population of the settlement. For obvious reasons, it is impossible to do this.

On the one hand, myths only cause harm, they interfere with understanding the real picture of the actions of Russian troops. However, the very fact of the appearance of these myths testifies to the enormous interest of the Russian people in the joint fate of Russia and Ukraine and to the liberation of Ukraine from Nazism. About indifference to what is happening. And this is a necessary prerequisite for victory.