The Americans presented a quiet version of the JLTV armored vehicle 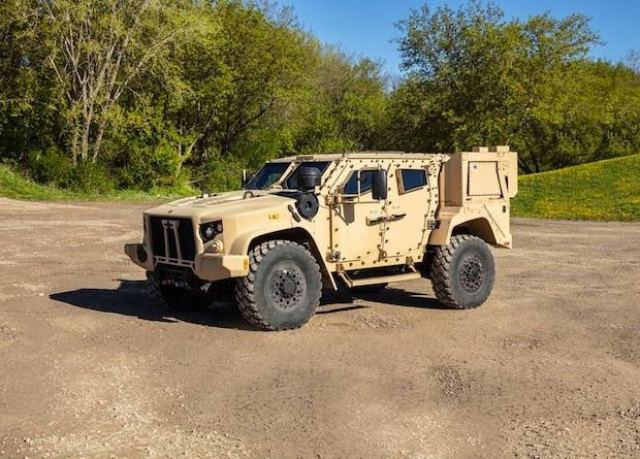 The American company Oshkosh Defense has introduced a quiet version of the armored vehicle JLTV - eJLTV. It received a hybrid-electric power plant, which provides fuel economy by 20 percent.

The US military launched the JLTV program in 2012 to find a replacement for the Humvee SUV. Three years later, Oshkosh Corporation received an eight-year contract for the production of 17,000 light tactical vehicles for the U.S. Army, Marine Corps and State Department.

The JLTV has four versions: general-purpose, light-armed, heavy-armed, and a multi-purpose two-door pickup truck. All of them are equipped with Duramax V turbo-diesel engines. Armored vehicles can carry from 1587.5 to 2313 kilograms of payload, depending on the configuration.

Oshkosh Defense introduced a hybrid-electric JLTV called eJLTV on January 25. The developers say that it is as efficient and protected as the basic versions, but, besides, it allows you to drive quieter and provides fuel economy by 20 percent. You can switch from quiet mode to normal mode on the go. eJLTV received a lithium-ion battery with a capacity of 30 kilowatt-hours. It is charged while the diesel engine is running, and it takes 30 minutes to fully recharge.

Oshkosh creates a hybrid-electric JLTV not at the request of the US Army, but on its own initiative. Executive vice president of the company John Bryan said that eJLTV started designing about 18 months ago. There are no orders for it yet, but the company can produce the car in series if they appear.

Earlier we wrote about Bradley tracked combat vehicles, which BAE Systems should equip with hybrid propulsion systems. It is assumed that this will make Bradley more maneuverable, lighter and more economical.