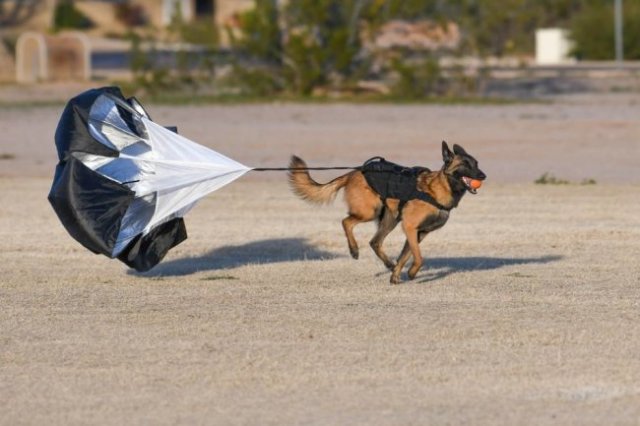 Parachutes that allow you to land a dog handler with a service dog from an airplane will begin to enter the Russian Armed Forces next year.

A parachute system for landing four-legged fighters will appear in Russia for the first time. It will help the fighter to quickly land together with the dog in hard-to-reach places where search, rescue or military operations are necessary.

"Deliveries of the dog suspension system to the Russian Defense Ministry will begin in 2022 after the product is accepted for supply and the design documentation is assigned the letter O1, that is, the start of serial production," the press service of the Technodinamika holding of the Rostec State Corporation told TASS. They noted that state tests of this unique parachute system should be completed by the end of 2021.

The "dog" parachute is designed to throw tailed paratroopers from an airplane from a height of up to 4000 meters. However, the developers plan to increase the height to 8000 meters. For such jumps, dogs develop a special oxygen mask so that the dog does not experience discomfort when breathing at high altitudes.

The suspension system itself, which is attached to the dog, is similar to a vest that securely fixes the spine of the animal. The system is designed for dogs weighing up to 45 kilograms, which means that it can be used for jumping with almost any dog that "serves" in the army or other law enforcement agencies.

The system is designed for animals weighing up to 45 kilograms, which means it can be used for jumping with almost any dog

The parachute system itself is designed in two versions. A lightweight version is when a parachutist makes a jump with a dog. Another, more complex version of the system is designed for tandem jumping. It is necessary when a dog handler who has no experience of parachuting is attached to the instructor's suspension system, and already the dog's suspension system is attached to him.

To the surprise of the parachute testers, the tailed paratroopers endure jumps absolutely calmly and treat the test with a height that they seem to be afraid of with restraint.

During the flight, they look out the window behind the clouds. After the jump, the dogs watch the approaching ground and even try to catch it with their paws.

After landing, the dog is immediately ready to follow the commands of the dog handler. As the testers note, the dog after the jump behaves adequately, normally, is ready to perform the tasks that are set before it.

The system for landing dogs is potentially interesting not only for the military, but also for representatives of other law enforcement agencies and structures.