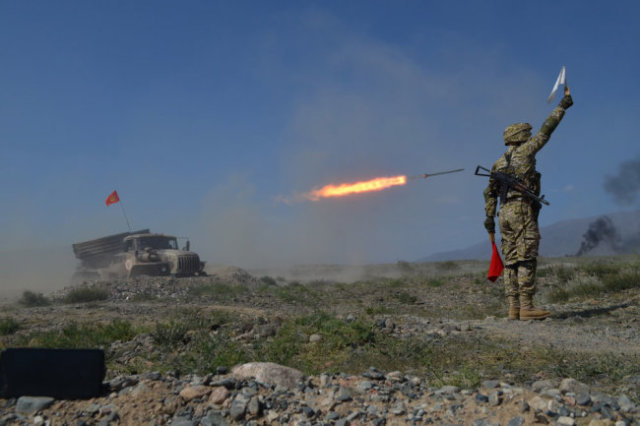 The CSTO exercises "Rubezh-2021"are coming to an end at the Edelweiss training ground in Kyrgyzstan. According to the plan of one of the episodes, the Russian contingent disrupted the offensive of an armed enemy who planned to occupy a settlement, the press service of the Central Military District reports.

The movement of the "enemy" column was detected by Orlan-10 drones. The data from them was sent to the command post, after which the commander of the Collective Rapid Deployment Forces decided to use the cover units - a motorized rifle platoon reinforced with tanks, flamethrower and anti-aircraft missile platoons. This was supposed to force the enemy to turn prematurely into a battle formation and launch an offensive in an unfavorable direction for him.

In order to inflict the most tangible damage to the enemy, they gave it from rocket-propelled infantry flamethrowers of increased range and power. They also used automatic grenade launchers AGS-17 "Flame", which fired at targets along a mounted trajectory.

After being hit by fire ,the "enemy" tried to regroup and continue moving, but Kyrgyz calculations of barrel and rocket artillery joined the fight against it. Motorized skirmishes, advancing on the flank, completed the defeat of the main forces.

It should be recalled that military contingents and operational groups of Kazakhstan, Kyrgyzstan, Russia, and Tajikistan take part in the joint exercise, which began on September 7. In total-more than a thousand people. 150 pieces of equipment are involved, including tanks, armored cars,infantry fighting vehicles, Tigers, multiple rocket launchers. Fighters, attack aircraft and helicopters are responsible for air support. So, the Su-25SM and Mi-8 struck unguided 80-mm air-to-surface missiles at targets simulating a simulated enemy column.

The rights to this material belong to Российская газета
The material is placed by the copyright holder in the public domain
Страны
Казахстан
Киргизия
Россия
Таджикистан
Продукция
АГС-17
Ми-8
Орлан-10
Су-25
Компании
Минoбороны РФ
ОДКБ
Проекты
БПЛА
Военные учения
Do you want to leave a comment? Register and/or Log in
Log in via Facebook
The Permanent Representative of the Russian Federation to international organizations in Vienna Ulyanov called the refusal of AUKUS to provide data on the union abnormal
The United States agrees with Stoltenberg on the inadmissibility of Russia's influence in the issue of NATO expansion
In the USA, it was proposed to ban "Solntsepeki" and "Pinocchio"
Putin signed the law on the powers of Roscosmos in the field of infrastructure construction
Korean aircraft carrier "won back" funding
Конфликты: Йемен - "забытая" война
The National Interest (США): российский танк Т-80 — это не шутка
In the USA, they were surprised by the size of the Su-75
Russia will offer India the technology of the Octopus tank
Шойгу счел необходимым построить в России еще несколько крупных городов
The State Duma appreciated the idea of banning the sale of grenades after the shooting at the MFC in Moscow
British military demanded $1.1 million for stuttering after Estonian frosts
Sasapost (Египет): американцы создают самый мощный лазер в истории. Что это значит?
Tank killer: the work of the PTKM-1R anti-roof mine was shown on video
Корпорация "Иркут" до конца 2018 года поставит ВКС РФ более 30 истребителей Су-30СМ
other topics discussed
2006-2021 © ВПК.name. All rights reserved.
When reprinting, link to ВПК.name required.
User agreement.
№ 21-PP in the register of information distributors.
18+
Website hosting: TimeWeb.