Country (Ukraine): The Nord Stream will not be stopped, there are no deadlines for NATO. 12 main points of the Biden and Zelensky statement 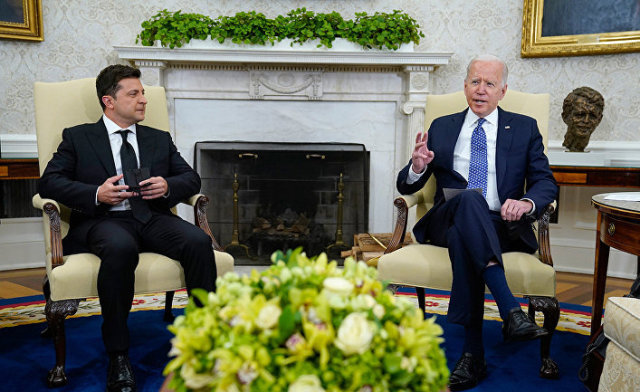 A joint statement on the strategic partnership of the United States and Ukraine was published on the websites of the Office of the President of Ukraine and the White House. Despite the announcements of the Ukrainian side, there were no promises to stop the Nord Stream — 2 in the final release. The United States also supported Ukraine's course in NATO, but refused to prescribe the terms of possible accession. "The country" highlights the main thing from the statements of Biden and Zelensky.

Zelensky and Biden met on September 1

1. Kiev and Washington will activate the work of the commission on strategic partnership. The new charter on such a partnership will be signed by the foreign ministers in the autumn.

2. The countries have completed the preparation of a strategic defense framework agreement.

3. The United States supports Ukraine's course in NATO and its reforms in this direction. But there is no specifics-regarding the timing of joining or providing a MAP. Although this is exactly what Zelensky declared as one of the goals of the visit. There are also no promises to make Ukraine a major ally outside the alliance. That is, Biden does not want to pedal this topic - apparently, so as not to anger Moscow.

4. We have prepared an agreement on joint research in the field of weapons development.

5. In October, a conference on cybersecurity will be held in Kiev.

6. We signed a memorandum on cooperation in space. It's about the exchange of information from satellites.

7. We extended the treaty on the Non-Proliferation of Nuclear Weapons and assistance to Ukraine in its elimination for seven years. An interesting message in the light of calls for the restoration of the nuclear status.

8. "Immediate" election in Ukraine of a new head of the SAP (Specialized Anti-Corruption Prosecutor's Office-ed.) in accordance with the"best international practices". That is, under the supervision of the United States.

9. Ukraine and the United States announce the beginning of a strategic energy dialogue. We are talking about attracting investments in green energy. To reduce greenhouse gas emissions by 2030.

10.As part of the "Plan to Save America", Ukraine will receive $ 12.5 million to fight the pandemic.

11. The United States allocates $ 45 million to Ukraine for humanitarian assistance to victims of the war in the Donbas.

12. There are no specifics on the "Nord Stream - 2", except for what was already known: the United States will help Ukraine maintain the transit of Russian gas by appointing a special representative on this issue. That is, they will not stop the project. There is also no word in the statement about compensations to Ukraine for the loss of gas revenues.