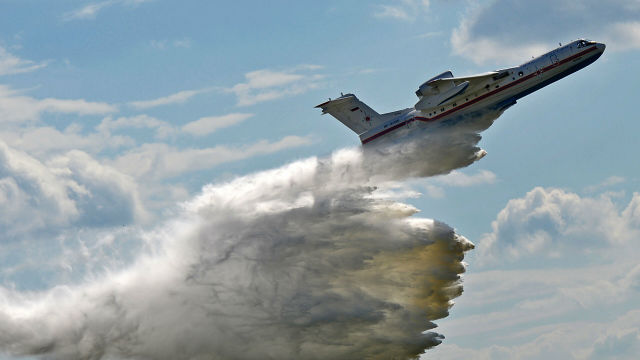 Kubinka (Moscow region). August 23. INTERFAX-The United Aircraft Corporation has received a request from Algeria for the supply of four Be-200 amphibious aircraft, the head of the UAC, Yuri Slyusar, told Interfax.

"We have received a request, we are considering it," Slyusar said.

He noted that we are talking about the supply of four Be-200 aircraft to Algeria.

The Be-200 is a multi-purpose amphibious aircraft designed for fire fighting, emergency assistance in areas of emergency disasters, water search and rescue, sanitary and cargo transportation, as well as environmental monitoring. The Be-200ChS can take 12 tons of water on board. The tanks are filled within 14 seconds at a speed of 150-190 km / h when planing on the water surface. For one refueling, the aircraft is able to drop up to 270 tons of water on the fire center.

The Be-200 is delivered to the Russian Ministry of Emergency Situations and the Navy (Navy).

The Be-200s are manufactured by the Beriev Taganrog Aviation Scientific and Technical Complex (TANTK) of the United Aircraft Corporation (UAC). The first flight of the amphibious aircraft took place on September 24, 1998.