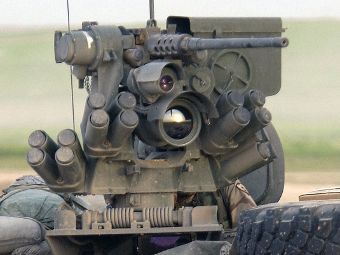 TSAMTO, August 23. The command of the French Armed Forces announced the testing of a 40-mm automatic grenade launcher manufactured by Heckler und Koch with the use of air-detonating grenades to neutralize micro - and mini-unmanned aerial vehicles.

According to Jane's Defense Weekly, the grenade launcher was installed on the remotely controlled M151 "Protector" armament module of Kongsberg Defense & Aerospace AS (Kongsberg), placed on the VAB armored vehicle. The vehicle was also equipped with a radar mounted on a telescopic mast with other components that are already used as part of the Milad UAV counteraction system.

According to preliminary information, the tests were successful. The practical application of this configuration is planned to begin this fall.

The basic version of the BBM VAB, armed with a 12.7-mm M2 machine gun instead of an automatic grenade launcher, is used by the French Armed Forces in Mali.

As reported by TSAMTO, in December 2019, Kongsberg signed a contract with the Federal Agency for Armaments, Information Technologies and Maintenance (BAAINBw) for the supply of a UAV counteraction system based on the "Protector"DUMV. This complex includes a Hensoldt radar and a 40-mm automatic grenade launcher with air-detonation ammunition.

A similar project developed by Kongsberg was presented in early 2020 by the Spanish company Escribano Mechanical & Engineering. The basis of the system is the Guardian 2.0 remote-controlled weapon module developed by Escribano, equipped with a 40-mm Mk19 automatic grenade launcher with non-lethal ammunition from Nammo.

The rights to this material belong to ЦАМТО
The material is placed by the copyright holder in the public domain
Страны
Испания
Мали
Франция
Продукция
Mk.19
VAB
Компании
Kongsberg
Проекты
2020-й год
БПЛА
ОНД
Do you want to leave a comment? Register and/or Log in
Log in via Facebook
The Permanent Representative of the Russian Federation to international organizations in Vienna Ulyanov called the refusal of AUKUS to provide data on the union abnormal
The United States agrees with Stoltenberg on the inadmissibility of Russia's influence in the issue of NATO expansion
In the USA, it was proposed to ban "Solntsepeki" and "Pinocchio"
Putin signed the law on the powers of Roscosmos in the field of infrastructure construction
Korean aircraft carrier "won back" funding
Конфликты: Йемен - "забытая" война
The National Interest (США): российский танк Т-80 — это не шутка
In the USA, they were surprised by the size of the Su-75
Russia will offer India the technology of the Octopus tank
Шойгу счел необходимым построить в России еще несколько крупных городов
The State Duma appreciated the idea of banning the sale of grenades after the shooting at the MFC in Moscow
British military demanded $1.1 million for stuttering after Estonian frosts
Sasapost (Египет): американцы создают самый мощный лазер в истории. Что это значит?
Tank killer: the work of the PTKM-1R anti-roof mine was shown on video
Корпорация "Иркут" до конца 2018 года поставит ВКС РФ более 30 истребителей Су-30СМ
other topics discussed
2006-2021 © ВПК.name. All rights reserved.
When reprinting, link to ВПК.name required.
User agreement.
№ 21-PP in the register of information distributors.
18+
Website hosting: TimeWeb.