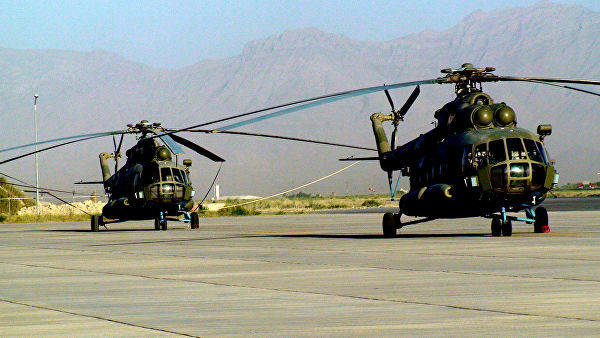 Moscow. August 13. INTERFAX-AVN-Russia is studying Afghanistan's request for the sale of combat helicopters, Zamir Kabulov, special representative of the President of the Russian Federation, director of the second Asia department of the Russian Foreign Ministry, told Interfax on Friday.

"No, we are not ready for anything. There was an appeal, it is being studied, " he said, answering the relevant question.

Afghan Foreign Minister Hanif Atmar said in an interview with Echo of Moscow radio on Thursday that Kabul is ready to buy combat helicopters from Russia and is waiting for a response from the Russian government.

"In order to strengthen our air force, we have asked and offered to purchase new helicopters from the Russian side. And, of course, we are talking about the fact that these helicopters will be purchased by our resources, our finances. And I expect a response from the Russian Federation on this issue, " Atmar said on Ekho Moskvy radio.

He said that Kabul is also interested in"repairing Mi-17 or Mi-35 helicopters that were previously purchased directly or indirectly from the Russian Federation."

The Mi-35 is a multi-purpose attack helicopter, an upgraded version of the Mi-24 helicopter. The helicopter crew consists of two people: the pilot and the weapons operator. Up to eight people of the landing party are accepted on board.

Atmar made this statement against the background of a large-scale offensive against government forces in Afghanistan by the Taliban movement (a terrorist organization banned in the Russian Federation).

Military experts differed in their assessments of the prospects for Russia's supply of combat helicopters to Afghanistan.

"The situation is ambiguous. On the one hand, it would seem that we have the right to sell weapons to the government of Afghanistan and even make a profit from it. On the other hand, this is a geopolitical issue - tomorrow the Taliban will come to power, and how they will look at us after such a delivery - as their enemies who armed their enemies," retired Colonel-General Leonid Ivashov, former head of the Main Directorate for International Military Cooperation of the Russian Defense Ministry, told Interfax on Thursday.

"Before making such a decision, it is necessary to analyze the situation in Afghanistan comprehensively," Ivashov said.

Another position is held by the scientist, head of the Center for International Security of the Institute of World Economy and International Relations (IMEMO) Alexey Arbatov of the Russian Academy of Sciences.

"Why not sell it? Moscow is interested in this government of Afghanistan remaining in power as long as possible," Arbatov told Interfax on Thursday.

"If the Taliban were not advancing, we would not have to worry. If they are strongly advancing, then everything that the government of Afghanistan needs to contain this offensive - helicopters, artillery, armored vehicles, planes, ammunition - must be supplied to them, and it is not necessary that it be for an immediate calculation. But these should be supplies that do not imply the presence of Russian military advisers in Afghanistan," Arbatov said.

X-555
16.08.2021 18:36
Да уж забавная новость.
Эти клоуны подпендосные и правда что-ли оборонятся собирались :))))
По-факту все рухнуло даже быстрее чем карточный домик.
0
Inform
Do you want to leave a comment? Register and/or Log in
Log in via Facebook
The Permanent Representative of the Russian Federation to international organizations in Vienna Ulyanov called the refusal of AUKUS to provide data on the union abnormal
The United States agrees with Stoltenberg on the inadmissibility of Russia's influence in the issue of NATO expansion
In the USA, it was proposed to ban "Solntsepeki" and "Pinocchio"
Putin signed the law on the powers of Roscosmos in the field of infrastructure construction
Korean aircraft carrier "won back" funding
Конфликты: Йемен - "забытая" война
The National Interest (США): российский танк Т-80 — это не шутка
In the USA, they were surprised by the size of the Su-75
Russia will offer India the technology of the Octopus tank
Шойгу счел необходимым построить в России еще несколько крупных городов
The State Duma appreciated the idea of banning the sale of grenades after the shooting at the MFC in Moscow
British military demanded $1.1 million for stuttering after Estonian frosts
Sasapost (Египет): американцы создают самый мощный лазер в истории. Что это значит?
Tank killer: the work of the PTKM-1R anti-roof mine was shown on video
Корпорация "Иркут" до конца 2018 года поставит ВКС РФ более 30 истребителей Су-30СМ
other topics discussed
2006-2021 © ВПК.name. All rights reserved.
When reprinting, link to ВПК.name required.
User agreement.
№ 21-PP in the register of information distributors.
18+
Website hosting: TimeWeb.