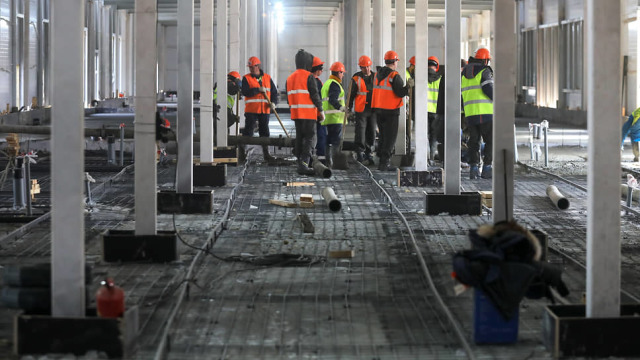 Since the beginning of 2021, specialists of the Military Construction Complex of the Ministry of Defense have been building 4 thousand objects of various purposes in different parts of the country. About 30 thousand specialists and more than 2.8 thousand pieces of equipment are involved in the construction sites of the Ministry of Defense every day. According to the ministry, it is planned to put into operation 3 thousand buildings and structures. Of these, 1,617 buildings have already been built and many have been commissioned on a turnkey basis.

"Among them are the world's northernmost basin on the Franz Josef Archipelago in the Arctic, new locations for the ships of the Caspian Flotilla in Dagestan, modern service housing for paratroopers in Tula and submariners of the Pacific Fleet in Kamchatka," the military department noted.

The Defense Ministry noted that military builders are also implementing civilian projects. So, in the Crimea, two water pipelines were laid in a short time and a modern hydraulic infrastructure was created. In addition, the legendary museum complex in the bay "Balaklava"was updated.

Also, the largest cancer center is being built in the Tula region, schools and kindergartens are being built in Dagestan under the "Education" and "Demography" programs, and the construction of a new consultative and diagnostic center has been completed in Kyzyl.

The new funds of the oldest in Russia, the legendary cadet corps in Omsk, will begin the academic year on September 1. CSKA sports complexes will open, including the largest climbing center in Europe. "Every year, from Kaliningrad to the Kuril Islands, from the Crimea to the Arctic, more than 3 thousand different buildings and structures are put into operation in the interests of the Armed Forces," the military department reported.

They stressed that the military construction complex of the Ministry of Defense is not only a national leader in the construction industry, but also one of the most efficient, powerful and mobile production structures.

The rights to this material belong to Российская газета
The material is placed by the copyright holder in the public domain
Страны
Россия
Проекты
Арктика
Военные учения
КФ
ТОФ
Do you want to leave a comment? Register and/or Log in
Log in via Facebook
The Permanent Representative of the Russian Federation to international organizations in Vienna Ulyanov called the refusal of AUKUS to provide data on the union abnormal
The United States agrees with Stoltenberg on the inadmissibility of Russia's influence in the issue of NATO expansion
In the USA, it was proposed to ban "Solntsepeki" and "Pinocchio"
Putin signed the law on the powers of Roscosmos in the field of infrastructure construction
Korean aircraft carrier "won back" funding
Конфликты: Йемен - "забытая" война
The National Interest (США): российский танк Т-80 — это не шутка
In the USA, they were surprised by the size of the Su-75
Russia will offer India the technology of the Octopus tank
Шойгу счел необходимым построить в России еще несколько крупных городов
The State Duma appreciated the idea of banning the sale of grenades after the shooting at the MFC in Moscow
British military demanded $1.1 million for stuttering after Estonian frosts
Sasapost (Египет): американцы создают самый мощный лазер в истории. Что это значит?
Tank killer: the work of the PTKM-1R anti-roof mine was shown on video
Корпорация "Иркут" до конца 2018 года поставит ВКС РФ более 30 истребителей Су-30СМ
other topics discussed
2006-2021 © ВПК.name. All rights reserved.
When reprinting, link to ВПК.name required.
User agreement.
№ 21-PP in the register of information distributors.
18+
Website hosting: TimeWeb.