The Russian military conducted exercises with flamethrowers in the SAR army 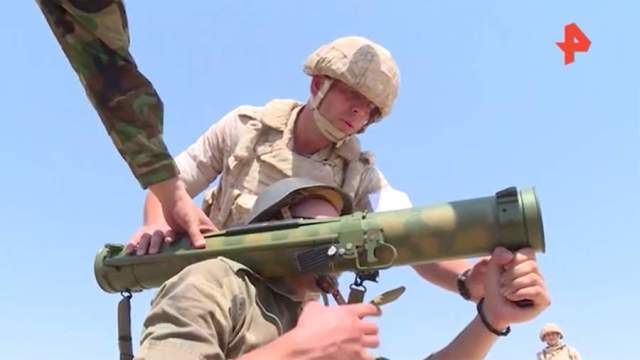 
Exercises in Syria are held regularly, despite the fact that the air temperature in the country sometimes reaches +50 degrees in summer.

"The personnel are ready, despite such heat, they are ready to conduct classes, although it is very difficult in these climatic conditions. But they are interested in it, and they continue to improve, " said Denis Chernov, a representative of the group of troops of the Russian Armed Forces in Syria.

According to the scenario of the exercises, the Syrian military had to repel a sabotage attack by militants.

Now all sabotage attacks are carried out with the help of special technical structures — dugouts, underground utilities. The flamethrower is ideal for completely burning out such engineering structures. In addition, it shoots at almost 2 thousand meters.

On July 16, the Russian military delivered food packages to the settlement of Al-Karamma in the Syrian province of Aleppo. The village has suffered seriously in recent years, the militants were expelled from here only in 2020.

The rights to this material belong to Известия.ru
The material is placed by the copyright holder in the public domain
Страны
Россия
Сирия
Компании
Минoбороны РФ
Проекты
2020-й год
Военные учения
Do you want to leave a comment? Register and/or Log in
Log in via Facebook
The United States agrees with Stoltenberg on the inadmissibility of Russia's influence in the issue of NATO expansion
The Permanent Representative of the Russian Federation to international organizations in Vienna Ulyanov called the refusal of AUKUS to provide data on the union abnormal
In the USA, it was proposed to ban "Solntsepeki" and "Pinocchio"
Putin signed the law on the powers of Roscosmos in the field of infrastructure construction
Korean aircraft carrier "won back" funding
Конфликты: Йемен - "забытая" война
The National Interest (США): российский танк Т-80 — это не шутка
In the USA, they were surprised by the size of the Su-75
Russia will offer India the technology of the Octopus tank
Шойгу счел необходимым построить в России еще несколько крупных городов
The State Duma appreciated the idea of banning the sale of grenades after the shooting at the MFC in Moscow
British military demanded $1.1 million for stuttering after Estonian frosts
Sasapost (Египет): американцы создают самый мощный лазер в истории. Что это значит?
Tank killer: the work of the PTKM-1R anti-roof mine was shown on video
Корпорация "Иркут" до конца 2018 года поставит ВКС РФ более 30 истребителей Су-30СМ
other topics discussed
2006-2021 © ВПК.name. All rights reserved.
When reprinting, link to ВПК.name required.
User agreement.
№ 21-PP in the register of information distributors.
18+
Website hosting: TimeWeb.