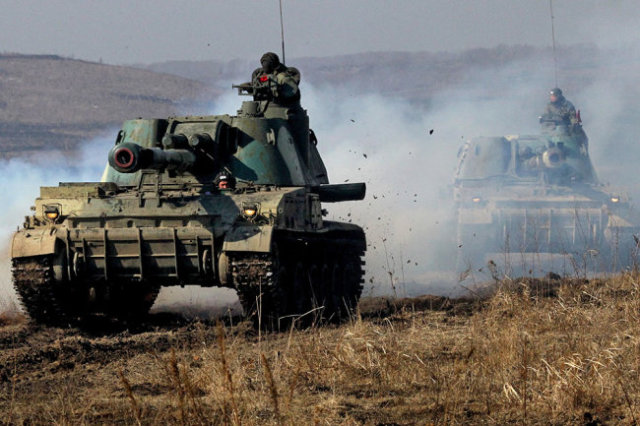 152-mm 2S3 "Acacia" are the most powerful self-propelled artillery units of the Syrian government forces. Recently, several such self-propelled guns were seen during their transfer to the province of Daraa, where terrorists have become more active.

Tracked vehicles were transported on semi-trailers, heavy trucks, as usual, to save resources.

The crews of combat vehicles were located directly on the armor. For example, the commanders were behind PKT machine guns mounted on rotating turrets, capable of hitting both air and ground targets. Their transported ammunition is up to 1,500 rounds.

In the same column there were trucks with ammunition, in order to provide long-term fire support to infantry and tank units, if necessary.

According to the experience of previous operations, very often self-propelled guns are used as assault weapons, firing at militants with direct fire, and do not act from closed positions.

By the beginning of the civil war, the Syrian ground forces had a park of 50 "Acacias". A small part of them were lost in the battles, and several units were destroyed by anti-tank guided missiles. This was due to the fact that the self-propelled guns were stationary for a long time without camouflage and protection in an open area. After such incidents, the crews tried not to repeat such gross mistakes.

Currently, the artillery units of the ground forces are massively using 122-mm 2S1 "Carnation" and a small number of 130-mm wheeled self-propelled guns made on the chassis of commercial vehicles directly in Syria.