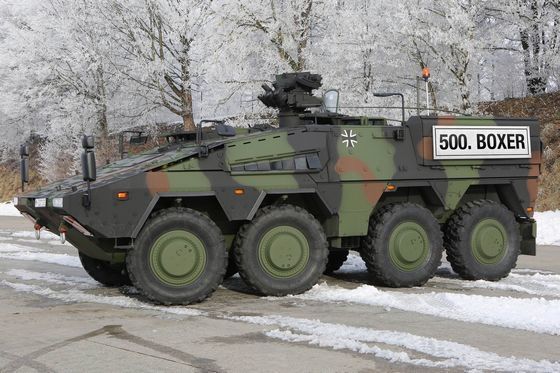 TSAMTO, July 22. KMW do Brasil Sistemas de Defesa, on behalf of the ARTEC joint venture (formed by Rheinmetall and Krauss-Maffei Wegmann), submitted to the Brazilian Military Command a proposal for the supply of the Boxer BBM with an 8x8 wheel formula, armed with 105-mm John Cockerill 3105 turrets (3000 series).

As reported by Infodefensa.com, the offer was made as part of the planned purchase of 93 to 226 new armored reconnaissance vehicles (VBC Cav-MSR 8x8) for the Brazilian Armed Forces.

Having established an enterprise in the locality of Santa Maria (Rio Grande do Sul) in 2010, the KMW do Brasil Sistemas de Defesa division gained a competitive advantage over other applicants. In addition, according to the developers, a proven project and a modular design that allows you to supply the "Boxer" in several versions make the car an attractive option for SV Brazil.

The aft module of the BBM "Boxer" can be replaced in 50 minutes by installing a new one, including those intended for the transportation of troops, medical evacuation, driver training or a 30-mm tower.

Currently, the company is fulfilling contracts for the maintenance of the Leopard-1A5 MBT, the Cheetah-1A2 self-propelled 35-mm ZAU and the corresponding simulators for the Brazilian SV. As noted, in the case of participation in the VBC Cav 8x8 project, production in Santa Maria will be expanded. If the tender is won, KMW do Brasil intends to invest in the organization of the assembly of armored vehicles on the basis of the enterprise, creating new jobs.

Developed by the Belgian company John Cockerill Defense, the two-seat Cockerill 3105 (C3105) turret is made of welded aluminum armor, equipped with a stabilized 105-mm rifled high-pressure cannon with a 12-16-round automatic loader and a paired 7.62-mm machine gun. The turret and gun guidance drives are electric, the range of gun guidance angles according to the angle of the place is from -10 to +42 degrees. The gun allows you to fire standard 105-mm NATO tank ammunition and launch anti-tank missiles (firing range up to 5 km).

The tower is equipped with stabilized day/night sights for the commander and the gunner, which allow shooting at targets in the hunter-killer mode at any time of the day, both on the spot and in motion.

The tower's protection meets the requirements of Stanag-4569 Level.5, it is possible to install PU smoke grenades, a system for detecting the location of the source of fire, etc.

The rights to this material belong to ЦАМТО
The material is placed by the copyright holder in the public domain
Страны
Бельгия
Бразилия
Продукция
Leopard-1
Компании
Krauss-Maffei
Rheinmetall
Проекты
NATO
Медицина
Do you want to leave a comment? Register and/or Log in
Log in via Facebook
The Permanent Representative of the Russian Federation to international organizations in Vienna Ulyanov called the refusal of AUKUS to provide data on the union abnormal
The United States agrees with Stoltenberg on the inadmissibility of Russia's influence in the issue of NATO expansion
In the USA, it was proposed to ban "Solntsepeki" and "Pinocchio"
Putin signed the law on the powers of Roscosmos in the field of infrastructure construction
Korean aircraft carrier "won back" funding
Конфликты: Йемен - "забытая" война
The National Interest (США): российский танк Т-80 — это не шутка
In the USA, they were surprised by the size of the Su-75
Russia will offer India the technology of the Octopus tank
Шойгу счел необходимым построить в России еще несколько крупных городов
The State Duma appreciated the idea of banning the sale of grenades after the shooting at the MFC in Moscow
British military demanded $1.1 million for stuttering after Estonian frosts
Sasapost (Египет): американцы создают самый мощный лазер в истории. Что это значит?
Tank killer: the work of the PTKM-1R anti-roof mine was shown on video
Корпорация "Иркут" до конца 2018 года поставит ВКС РФ более 30 истребителей Су-30СМ
other topics discussed
2006-2021 © ВПК.name. All rights reserved.
When reprinting, link to ВПК.name required.
User agreement.
№ 21-PP in the register of information distributors.
18+
Website hosting: TimeWeb.