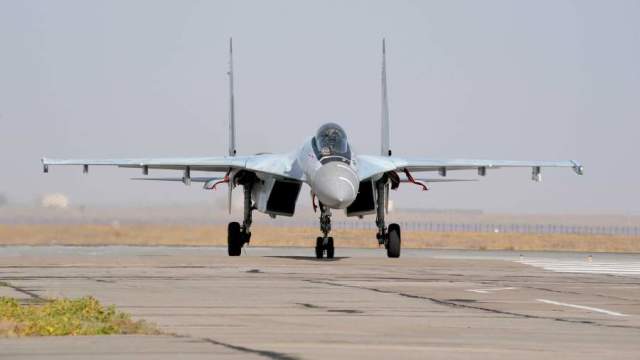 Russia plans to supply Indonesia with a batch of Su-35 multi-purpose combat fighters. This was announced on Wednesday, July 21, by the press secretary of the Federal Service for Military-Technical Cooperation (FSVTS) Valeria Reshetnikova.

"The project of delivering 11 Su-35 multi-role fighters to Jakarta has attracted the close attention of the world community from the very beginning. It is not surprising that after its signing, the Indonesian side faced active pressure from representatives of individual countries," she told TASS during the MAKS — 2021 air show.

According to her, Jakarta was strongly "recommended" to abandon the project at all possible levels, but Russia still intends to deliver a batch of aircraft.

Reshetnikova also noted that Russia considers Indonesia as one of the key partners in the Asia-Pacific region.

Russia and Indonesia signed a contract for the supply of 11 Su-35 multifunctional fighters in February 2018. Jakarta wanted to receive the first plane by October, and the delivery was to be carried out within two years. However, the implementation of the contact has not yet begun.

In March 2019, Mikhail Petukhov, deputy director of the federal Service for Military-technical cooperation, announced the continuation of cooperation between Russia and Indonesia under the contract for the supply of Su-35 fighters and denied information about Jakarta's rejection of the agreement.

On July 20, the head of the Federal Service for Military-Technical Cooperation (FSVTS), Dmitry Shugaev, said that Russia had received several applications from foreign customers for the supply of Su-35 multi-purpose fighters. He recalled that modern Russian-made aviation equipment, including the Su-35, has successfully proven itself during the operation of the Russian Aerospace Forces in Syria.

On the same day, the MAKS-2021 International Aerospace Salon opened in Zhukovsky, near Moscow. During the presidential screening, on the first day, viewers will be able to see the flights of Ka-226 and Mi-171 helicopters, Su-57 and MiG-35 fighters and an experienced passenger aircraft MS-21-310.

The rights to this material belong to Известия.ru
The material is placed by the copyright holder in the public domain
Страны
Индонезия
Россия
Сирия
Продукция
КА-226
Ми-17
Ми-8АМТ
МиГ-35
ПАК ФА
Су-35
Компании
ФСВТС РФ
Персоны
Шугаев Дмитрий
Проекты
МАКС-20XX
МС-21
Do you want to leave a comment? Register and/or Log in
Log in via Facebook
The Permanent Representative of the Russian Federation to international organizations in Vienna Ulyanov called the refusal of AUKUS to provide data on the union abnormal
In the USA, they were surprised by the size of the Su-75
The United States agrees with Stoltenberg on the inadmissibility of Russia's influence in the issue of NATO expansion
In the USA, it was proposed to ban "Solntsepeki" and "Pinocchio"
Putin signed the law on the powers of Roscosmos in the field of infrastructure construction
Korean aircraft carrier "won back" funding
Конфликты: Йемен - "забытая" война
The National Interest (США): российский танк Т-80 — это не шутка
Russia will offer India the technology of the Octopus tank
Шойгу счел необходимым построить в России еще несколько крупных городов
The State Duma appreciated the idea of banning the sale of grenades after the shooting at the MFC in Moscow
British military demanded $1.1 million for stuttering after Estonian frosts
Sasapost (Египет): американцы создают самый мощный лазер в истории. Что это значит?
Tank killer: the work of the PTKM-1R anti-roof mine was shown on video
Корпорация "Иркут" до конца 2018 года поставит ВКС РФ более 30 истребителей Су-30СМ
other topics discussed
2006-2021 © ВПК.name. All rights reserved.
When reprinting, link to ВПК.name required.
User agreement.
№ 21-PP in the register of information distributors.
18+
Website hosting: TimeWeb.