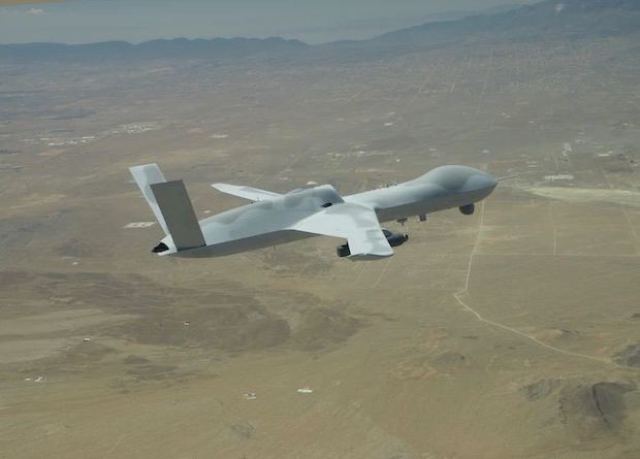 The Skyborg artificial intelligence system for unmanned wingmen has taken to the sky for the second time — this time on the Avenger jet unmanned aerial vehicle. As reported by The US Air Force Research Laboratory, the flight lasted two and a half hours.

Skyborg is a program to create cheap maneuverable combat drones and an artificial intelligence system to control them. Such devices should take over part of the strike tasks of manned aircraft. Last year, the US military announced a tender for the development of prototypes of a software and hardware complex-the "brain"for an unmanned slave. For the first time, the "brain" took off in May. It was installed on the UTAP-22 tactical drone of the Kratos company.

General Atomics in January signed a contract with the US Air Force to modify two Avenger jet drones to test the "brain" of unmanned wingmen. The Avenger can reach speeds of up to 740 kilometers per hour, stay in the air for up to 18 hours and carry weapons weighing up to 2.9 tons. The length of the drone is 13 meters, and the wingspan is 20 meters. It has an internal weapons compartment and six external suspension points for missiles and bombs.

The second flight of the Skyborg artificial intelligence system took place on June 24 at Edwards Air Base in California. This time, the" brain " of the unmanned slave was installed on a jet Avenger. The flight lasted two and a half hours. At first, the drone was controlled by an operator, but when the device rose to a safe height, he transferred control over it to the Skyborg system. The "Brain" successfully passed the test for the second time — it responded to navigation commands and adjusted to the ranges of flight modes. This means that in the future, pilots will be able to use the Skyborg system to control different types of drones.

In addition to General Atomics and Kratos, the US Air Force has signed a contract for the assembly and flight testing of prototypes of unmanned wingmen with Boeing. The latter was the only one who has not yet tested the" brain " of Skyborg on their drones. But she has an unmanned Wingman Loyal Wingman in development, about the first flight of which we wrote earlier.

The rights to this material belong to N+1
The material is placed by the copyright holder in the public domain
Страны
США
Продукция
UTAP-22 Mako
Компании
Boeing
General Atomics
Kratos Defense
Проекты
AI
БПЛА
Do you want to leave a comment? Register and/or Log in
Log in via Facebook
The Permanent Representative of the Russian Federation to international organizations in Vienna Ulyanov called the refusal of AUKUS to provide data on the union abnormal
In the USA, they were surprised by the size of the Su-75
The United States agrees with Stoltenberg on the inadmissibility of Russia's influence in the issue of NATO expansion
In the USA, it was proposed to ban "Solntsepeki" and "Pinocchio"
Putin signed the law on the powers of Roscosmos in the field of infrastructure construction
Korean aircraft carrier "won back" funding
Конфликты: Йемен - "забытая" война
The National Interest (США): российский танк Т-80 — это не шутка
Russia will offer India the technology of the Octopus tank
Шойгу счел необходимым построить в России еще несколько крупных городов
The State Duma appreciated the idea of banning the sale of grenades after the shooting at the MFC in Moscow
British military demanded $1.1 million for stuttering after Estonian frosts
Sasapost (Египет): американцы создают самый мощный лазер в истории. Что это значит?
Tank killer: the work of the PTKM-1R anti-roof mine was shown on video
Корпорация "Иркут" до конца 2018 года поставит ВКС РФ более 30 истребителей Су-30СМ
other topics discussed
2006-2021 © ВПК.name. All rights reserved.
When reprinting, link to ВПК.name required.
User agreement.
№ 21-PP in the register of information distributors.
18+
Website hosting: TimeWeb.