The General Directorate of Armaments (Direction Générale de l'Armement - DGA) of the Ministry of the Armed Forces of France announced in messages on June 24 and 25, 2021 [...], that on June 1 it issued a contract to the French Nexter group for the repair and serial modernization of the first 50 Leclerc tanks of the French army according to the Leclerc XLR variant (out of 200 planned). 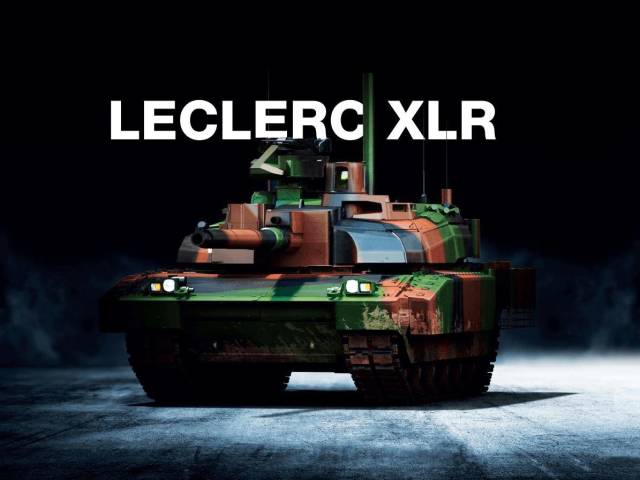 On June 26, this information was confirmed by the Nexter Group, indicating that the modernization contract is a development of the contract signed by it with the DGA on April 1, Marché de Soutien en Service 2 (MSS2) for 10-year technical support of Leclerc tanks of the French army.

Also, 17 Leclerc DCL armored repair and evacuation vehicles are subject to repair and modernization under the option. It is planned that the modernized tanks will remain in service until the arrival of a promising tank created under the Franco-German MGS program by about 2040.

A contract worth 330 million euros for the development of the Leclerc XLR modernization project was issued to Nexter in March 2015. It is reported that the modernization of the Leclerc XLR project, in addition to carrying out a general overhaul of the tank, primarily includes the installation of equipment for integrating the tank into the SCORPION network integrated system of the French army (including the SICS automated control system and the Thales Contact communication complex). It is also planned to modernize the fire control system, install a laser radiation warning system, a GALIX multispectral smoke jamming system, a BARAGE radio suppression system, a new diagnostic system, a new display system for the commander and gunner, upgrade the navigation system, strengthen ballistic and mine protection, install screen grilles in the stern of the hull and turret and install a remotely controlled FN Herstal T2B combat module with a 7.62 mm machine gun on the turret. It is planned to introduce new shots into the ammunition of the 120-mm gun.

In total, from 1992 to 2007, the French army received 406 serial Leclerc tanks manufactured by the GIAT association (since 2006 - Nexter), as well as 18 Leclerc DCL BREMS made on the same chassis and two prototypes of DNG engineering vehicles transferred to it. For 2020, 222 tanks and 18 BRAM remained in the troops, of which 200 tanks and 17 BRAM are subject to modernization under the Leclerc XLR program.

The rights to this material belong to bmpd.livejournal.com
The material is placed by the copyright holder in the public domain
Страны
Германия
Франция
Продукция
Leclerc
Компании
FN Herstal
Nexter
Thales
Проекты
2020-й год
Do you want to leave a comment? Register and/or Log in
Log in via Facebook
The Permanent Representative of the Russian Federation to international organizations in Vienna Ulyanov called the refusal of AUKUS to provide data on the union abnormal
In the USA, it was proposed to ban "Solntsepeki" and "Pinocchio"
The United States agrees with Stoltenberg on the inadmissibility of Russia's influence in the issue of NATO expansion
Putin signed the law on the powers of Roscosmos in the field of infrastructure construction
Korean aircraft carrier "won back" funding
Конфликты: Йемен - "забытая" война
The National Interest (США): российский танк Т-80 — это не шутка
In the USA, they were surprised by the size of the Su-75
Russia will offer India the technology of the Octopus tank
Шойгу счел необходимым построить в России еще несколько крупных городов
The State Duma appreciated the idea of banning the sale of grenades after the shooting at the MFC in Moscow
British military demanded $1.1 million for stuttering after Estonian frosts
Sasapost (Египет): американцы создают самый мощный лазер в истории. Что это значит?
Tank killer: the work of the PTKM-1R anti-roof mine was shown on video
Корпорация "Иркут" до конца 2018 года поставит ВКС РФ более 30 истребителей Су-30СМ
other topics discussed
2006-2021 © ВПК.name. All rights reserved.
When reprinting, link to ВПК.name required.
User agreement.
№ 21-PP in the register of information distributors.
18+
Website hosting: TimeWeb.