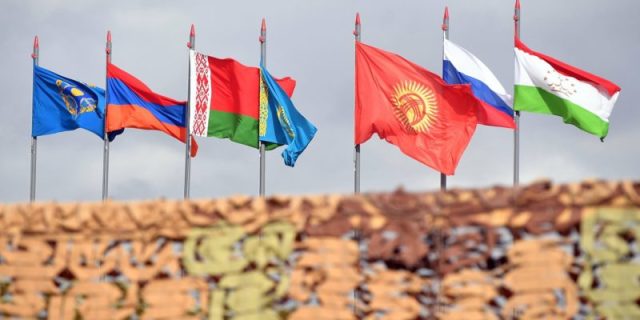 MOSCOW, June 23. /TASS/. Russian Defense Minister Sergei Shoigu suggested discussing issues related to the situation in Afghanistan, from where NATO forces are being withdrawn, with colleagues from the CSTO and border states in the near future.

"I think that we should discuss these issues in the near future," Shoigu said at a meeting with Kazakh Defense Minister Nurlan Yermekbayev.

Speaking about the problems of regional security, Shoigu noted that the Russian Federation is particularly concerned about the situation in neighboring Afghanistan in connection with the decision to withdraw NATO military contingents from there.

"We don't really believe that there will be peace and tranquility there. 20 years of the presence of the NATO contingent on this territory have not led to the fact that it was possible to achieve stability in Afghanistan," Shoigu said. "Therefore, we are holding consultations with our colleagues from Uzbekistan, Tajikistan, with you, our Kyrgyz friends," the minister said, suggesting that in the near future we will discuss issues related to the situation in Afghanistan with colleagues from the CSTO and border states.

He thanked his colleague for finding an opportunity to visit Moscow in the context of the pandemic and take part in the Moscow Conference on International Security.

"The Republic of Kazakhstan is the main strategic ally and the most important partner of Russia. The interaction of our defense departments is maintained at a high level and is carried out both on a bilateral basis and in a multilateral format within the framework of the CIS, the CSTO and the SCO, " Shoigu said, suggesting that we move on to discussing topical issues of cooperation.

The rights to this material belong to ТАСС
The material is placed by the copyright holder in the public domain
Страны
Афганистан
Казахстан
Киргизия
Россия
Таджикистан
Узбекистан
Компании
Минoбороны РФ
ОДКБ
Персоны
Шойгу Сергей
Проекты
NATO
ШОС
Do you want to leave a comment? Register and/or Log in
Log in via Facebook
The Permanent Representative of the Russian Federation to international organizations in Vienna Ulyanov called the refusal of AUKUS to provide data on the union abnormal
The United States agrees with Stoltenberg on the inadmissibility of Russia's influence in the issue of NATO expansion
In the USA, they were surprised by the size of the Su-75
The National Interest (США): российский танк Т-80 — это не шутка
Korean aircraft carrier "won back" funding
Шойгу счел необходимым построить в России еще несколько крупных городов
The State Duma appreciated the idea of banning the sale of grenades after the shooting at the MFC in Moscow
British military demanded $1.1 million for stuttering after Estonian frosts
Sasapost (Египет): американцы создают самый мощный лазер в истории. Что это значит?
Tank killer: the work of the PTKM-1R anti-roof mine was shown on video
Корпорация "Иркут" до конца 2018 года поставит ВКС РФ более 30 истребителей Су-30СМ
Как России зарабатывать больше на продаже вооружений
Putin signed the law on the powers of Roscosmos in the field of infrastructure construction
In the USA, they called the advantages of the Russian "Sun"
Американский эксперт назвал пять мощнейших российских танков
other topics discussed
2006-2021 © ВПК.name. All rights reserved.
When reprinting, link to ВПК.name required.
User agreement.
№ 21-PP in the register of information distributors.
18+
Website hosting: TimeWeb.