By the end of the year, the heavy flamethrower system TOS-2 "Tosochka" will complete state tests 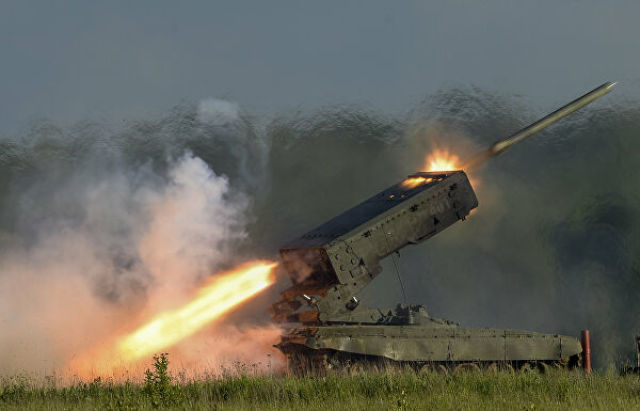 The head of the Technodinamika holding, Igor Nasenkov, said that according to the results of the tests, a decision will be made on putting it into service

ST. PETERSBURG, June 4. /TASS/. The Tosochka heavy flamethrower system TOS-2 will complete state tests by the end of 2021. This was announced on Friday by the head of the holding company "Technodinamika" of the state Corporation "Rostec" Igor Nasenkov during the SPIEF-2021.

During the forum, the Governor of the Perm Region Dmitry Makhonin and Igor Nasenkov discussed the development of PJSC " Motovilikhinsky Plants "(part of the RT-Capital contour of Rostec). On the basis of the "Motovilikha plants", a separate division of the Tula enterprise JSC "NPO" Splav" named after A. N. Ganichev "(under the management of JSC"Technodinamika") was created.

"Now the enterprises are actively working on TOC-2. It is planned that by the end of this year, the new system will pass state tests, according to the results of which a decision will be made on its commissioning. As a result, the company in Perm will be loaded with new orders, " Nasenkov said.

TOS-2 "Tosochka" - the successor of the heavy flamethrower system TOS-1A "Solntsepek" with improved tactical and technical characteristics. Unlike its predecessor, it is made on the basis of the Ural car with increased load capacity and cross-country ability. It has an increased launch range of unguided rockets. Aiming, shooting, and fire control of the TOS-2 are fully automated. A crane is mounted on the machine, so the system does not need a transport-loading machine. In addition, the TOS-2 is equipped with a system of electronic protection against high-precision weapons.

The St. Petersburg International Economic Forum, organized by the Roscongress Foundation, takes place from 2 to 5 June. The theme of the forum this year: "Together again. The Economy of the New Reality". SPIEF-2021 is held in full-time format in compliance with all epidemiological safety measures. TASS acts as an information partner and photo-hosting agency of the event.