Roscosmos has established round-the-clock security of the Buran ship" 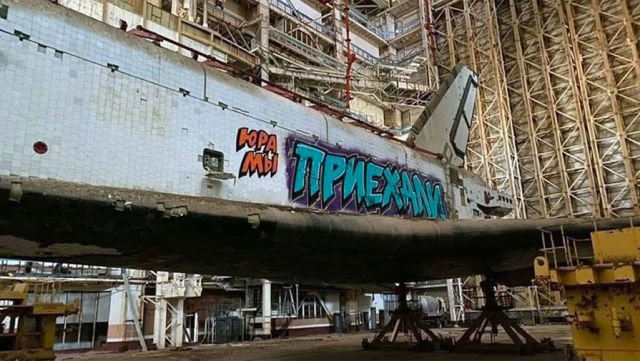 ST. PETERSBURG, June 3. /TASS/. Roscosmos took the Buran spacecraft at the Baikonur cosmodrome facility under round-the-clock security. This was announced on Thursday by the head of the state corporation Dmitry Rogozin at SPIEF-2021.

Earlier, one of the users of the social network Instagram posted photos showing a painted "Buran". The space shuttle was covered in graffiti. Later, Roscosmos confirmed that a group of unknown persons had entered the object of the Baikonur cosmodrome, where the second Buran flight vehicle and a mock-up of a rocket-plane ship are located, and said that the inscriptions had already been painted over.

"We put up round-the-clock security there. I think such incidents will not happen, " Rogozin said.

According to him, the unfinished spacecraft and its layout "somehow ended up in the hands of a private citizen of Kazakhstan". This fact is being investigated.

Rogozin said that a trial is underway between Kazakhstan and this private individual, it will take about three months. After that, the future fate of the "Buran"will be decided.

Buran is a Soviet reusable spacecraft. On November 15, 1988, it was launched from the Baikonur cosmodrome (now Kazakhstan) using an Energia launch vehicle, made two orbits around the Earth and landed on the territory of the cosmodrome. The flight took place without a crew, its duration was 205 minutes. The sample, which has been in space, was destroyed due to the collapse of the roof of the assembly and test building at Baikonur in 2002.

Никогда такого не было, а тут вдруг.
0
Inform
Do you want to leave a comment? Register and/or Log in
Log in via Facebook
The Permanent Representative of the Russian Federation to international organizations in Vienna Ulyanov called the refusal of AUKUS to provide data on the union abnormal
The United States agrees with Stoltenberg on the inadmissibility of Russia's influence in the issue of NATO expansion
In the USA, they were surprised by the size of the Su-75
The National Interest (США): российский танк Т-80 — это не шутка
Korean aircraft carrier "won back" funding
Шойгу счел необходимым построить в России еще несколько крупных городов
The State Duma appreciated the idea of banning the sale of grenades after the shooting at the MFC in Moscow
British military demanded $1.1 million for stuttering after Estonian frosts
Sasapost (Египет): американцы создают самый мощный лазер в истории. Что это значит?
Tank killer: the work of the PTKM-1R anti-roof mine was shown on video
Корпорация "Иркут" до конца 2018 года поставит ВКС РФ более 30 истребителей Су-30СМ
Как России зарабатывать больше на продаже вооружений
Putin signed the law on the powers of Roscosmos in the field of infrastructure construction
In the USA, they called the advantages of the Russian "Sun"
Американский эксперт назвал пять мощнейших российских танков
other topics discussed
2006-2021 © ВПК.name. All rights reserved.
When reprinting, link to ВПК.name required.
User agreement.
№ 21-PP in the register of information distributors.
18+
Website hosting: TimeWeb.