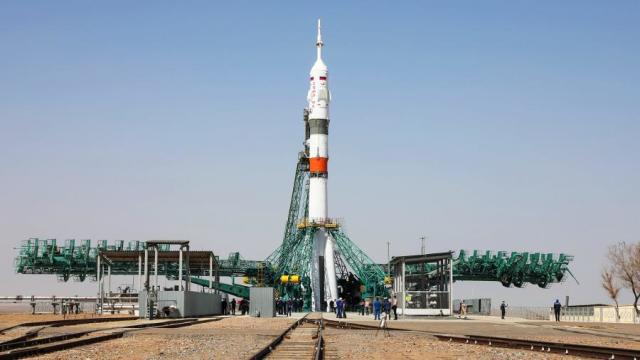 Moscow. June 1. INTERFAX-Glavkosmos plans to order two manned Soyuz spacecraft for future space tourists, they will be ready by the end of 2023, the head of the company Dmitry Loskutov told Interfax.

Glavkosmos, under the leadership of Roscosmos, is working with industry enterprises to create an advanced "reserve" in terms of creating space technology - we want to be ready for the commercial space flight service to be offered to the customer at the end of 2023. Currently, negotiations are underway with several representatives of the customers, " Loskutov said.

"The ships, after all corporate procedures are completed, should be ordered for space tourists - this is designed to reduce the waiting time for the readiness of the materiel, so that commercial participants in space flight do not have to wait too long," he added.

Earlier, the rocket and Space Corporation Energia reported that the Board of Directors of the corporation approved the conclusion of a contract with Glavkosmos for the "manufacture and supply of two manned transport spacecraft Soyuz MS". The estimated price will be 5.06 billion rubles.

On June 25, 2019, the state corporation Roscosmos announced that the rocket and space corporation Energia and the American company Space Adventures signed a contract to deliver two space tourists to the ISS in 2023.

In November 2019, the head of Roscosmos announced that the state corporation had ordered the production of two additional Soyuz rockets for commercial launches from Energia. It was reported that the "tourist" version of the ship will be converted to control one person.

In December 2019, it became known that the cost of the flight of the Soyuz-MS spacecraft for space tourists will be 2.5 billion rubles. This amount was mentioned in the documentation of the ship's developer-RSC Energia.

The state corporation reported that Roscosmos and Space Adventure have been cooperating in the field of space tourism since 2001, when the first space tourist Denis Tito flew into orbit.

Enterprises of the industry have already started to create a manned transport vehicle "Soyuz MS" and a launch vehicle "Soyuz-2" for the flight of tourists into space.

The rights to this material belong to Интерфакс-АВН
The material is placed by the copyright holder in the public domain
Страны
Россия
США
Компании
Space Adventures
Роскосмос
Энергия РКК
Проекты
МКС
Союз ПКК
Союз РН
Союз-2 РН
Do you want to leave a comment? Register and/or Log in
Log in via Facebook
The Permanent Representative of the Russian Federation to international organizations in Vienna Ulyanov called the refusal of AUKUS to provide data on the union abnormal
The United States agrees with Stoltenberg on the inadmissibility of Russia's influence in the issue of NATO expansion
In the USA, they were surprised by the size of the Su-75
The National Interest (США): российский танк Т-80 — это не шутка
Korean aircraft carrier "won back" funding
Шойгу счел необходимым построить в России еще несколько крупных городов
The State Duma appreciated the idea of banning the sale of grenades after the shooting at the MFC in Moscow
British military demanded $1.1 million for stuttering after Estonian frosts
Sasapost (Египет): американцы создают самый мощный лазер в истории. Что это значит?
Tank killer: the work of the PTKM-1R anti-roof mine was shown on video
Корпорация "Иркут" до конца 2018 года поставит ВКС РФ более 30 истребителей Су-30СМ
Как России зарабатывать больше на продаже вооружений
Putin signed the law on the powers of Roscosmos in the field of infrastructure construction
In the USA, they called the advantages of the Russian "Sun"
Американский эксперт назвал пять мощнейших российских танков
other topics discussed
2006-2021 © ВПК.name. All rights reserved.
When reprinting, link to ВПК.name required.
User agreement.
№ 21-PP in the register of information distributors.
18+
Website hosting: TimeWeb.