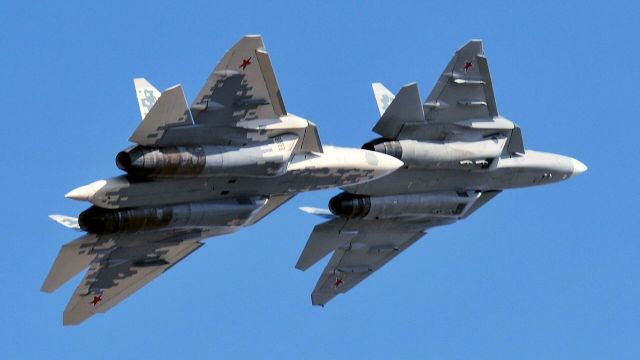 MOSCOW, May 26 — RIA Novosti. The Russian company "Sukhoi" has initiated work on the creation of a tactical single-engine fighter of the 5th generation, which will be built with the use of stealth technologies and the use of developments on the Su-57, a source in the aircraft industry told RIA Novosti.

To date, all fighters produced by the Russian Federation, including the most modern Su-57, are equipped with two engines.

"The Sukhoi Design Bureau is actively conducting research on the creation of a light multi-purpose single-engine fighter of the 5th generation. When creating the aircraft, it is planned to widely use the groundwork developed in the framework of the creation of the Su-57, including the latest engine "product 30", radio — absorbing coatings, avionics, weapons, " the agency interlocutor said.

The source noted that the new aircraft should have a normal take-off weight of no more than 18 tons, a thrust-to-weight ratio of at least 1, reduced radar visibility, a maximum flight speed of more than two sound speeds, super-maneuverability modes and a shortened take-off due to the deflected thrust vector of the engine.

The source added that " the layout of the fighter will have a single ventral multi-mode air intake, as it is implemented on many modern single-engine aircraft."

He specified that at the stage of creating a pilot machine, the Al-31FN engine of series 3 and 4, which has already been tested on foreign fighters, can be used.

Currently, single-engine fighters are widely used in the world. The most famous and most popular of them on the world arms market are the American F — 16 and F-35 fighters, the Swedish JAS-39 GRIPEN and the Chinese J-10. The presence of only one engine significantly reduces the cost and complexity of the production of the aircraft, as well as simplifies and reduces the cost of its operation and maintenance. At the same time, one engine reduces the reliability and combat survivability of the aircraft, limits the maximum combat load of fighters, which narrows their combat potential.

The rights to this material belong to РИА Новости
The material is placed by the copyright holder in the public domain
Страны
Китай
Россия
США
Швеция
Продукция
F-16
F-35
Gripen NG
J-10
АЛ-31Ф
АЛ-31ФH
ПАК ФА
Компании
Сухой ПАО
Проекты
Истребитель 5 поколения
Do you want to leave a comment? Register and/or Log in
Log in via Facebook
The Permanent Representative of the Russian Federation to international organizations in Vienna Ulyanov called the refusal of AUKUS to provide data on the union abnormal
The United States agrees with Stoltenberg on the inadmissibility of Russia's influence in the issue of NATO expansion
In the USA, they were surprised by the size of the Su-75
The National Interest (США): российский танк Т-80 — это не шутка
Korean aircraft carrier "won back" funding
Шойгу счел необходимым построить в России еще несколько крупных городов
The State Duma appreciated the idea of banning the sale of grenades after the shooting at the MFC in Moscow
British military demanded $1.1 million for stuttering after Estonian frosts
Sasapost (Египет): американцы создают самый мощный лазер в истории. Что это значит?
Tank killer: the work of the PTKM-1R anti-roof mine was shown on video
Корпорация "Иркут" до конца 2018 года поставит ВКС РФ более 30 истребителей Су-30СМ
Как России зарабатывать больше на продаже вооружений
Putin signed the law on the powers of Roscosmos in the field of infrastructure construction
In the USA, they called the advantages of the Russian "Sun"
Американский эксперт назвал пять мощнейших российских танков
other topics discussed
2006-2021 © ВПК.name. All rights reserved.
When reprinting, link to ВПК.name required.
User agreement.
№ 21-PP in the register of information distributors.
18+
Website hosting: TimeWeb.