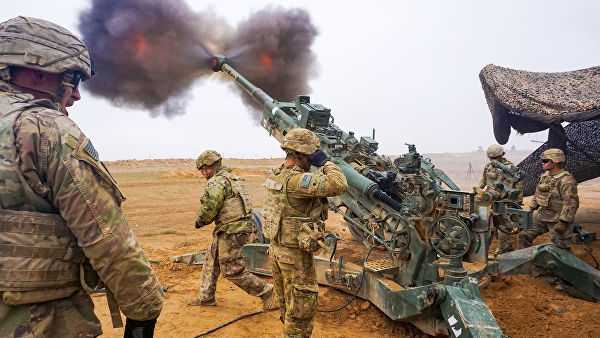 Washington. May 24. INTERFAX - As the United States reduces its military presence in the Middle East, Russia and China will seek to expand their influence in the region, according to the commander of the US Central Command, General Frank McKenzie.

"The Middle East in a broad sense is an area of intense competition between the great powers. I think that as we adjust our position in the region, Russia and China will be watching very closely to see if there is a vacuum that they can fill, " McKenzie told the Associated Press (AP) and ABC News.

According to him, one of the areas that Russia and China could use in the absence of the United States could be the sale of weapons: Russia is ready to sell air defense systems to Middle Eastern countries, and China has long-term plans to create military bases in this area.

The AP notes that the administration of President Joe Biden is seeking to expand the US presence in the Indo-Pacific region to counter China, which it has identified as a major threat to US national security.

McKenzie said he "fully agrees that China should be the main threat we are targeting." At the same time, the general noted, "we are a global power, and we need to have a global worldview, which means that there is an opportunity to consider the globe as a whole."

The rights to this material belong to Интерфакс-АВН
The material is placed by the copyright holder in the public domain
Страны
Китай
Россия
США
Do you want to leave a comment? Register and/or Log in
Log in via Facebook
The Permanent Representative of the Russian Federation to international organizations in Vienna Ulyanov called the refusal of AUKUS to provide data on the union abnormal
The United States agrees with Stoltenberg on the inadmissibility of Russia's influence in the issue of NATO expansion
In the USA, they were surprised by the size of the Su-75
The National Interest (США): российский танк Т-80 — это не шутка
Korean aircraft carrier "won back" funding
Шойгу счел необходимым построить в России еще несколько крупных городов
The State Duma appreciated the idea of banning the sale of grenades after the shooting at the MFC in Moscow
British military demanded $1.1 million for stuttering after Estonian frosts
Sasapost (Египет): американцы создают самый мощный лазер в истории. Что это значит?
Tank killer: the work of the PTKM-1R anti-roof mine was shown on video
Корпорация "Иркут" до конца 2018 года поставит ВКС РФ более 30 истребителей Су-30СМ
Как России зарабатывать больше на продаже вооружений
Putin signed the law on the powers of Roscosmos in the field of infrastructure construction
In the USA, they called the advantages of the Russian "Sun"
Американский эксперт назвал пять мощнейших российских танков
other topics discussed
2006-2021 © ВПК.name. All rights reserved.
When reprinting, link to ВПК.name required.
User agreement.
№ 21-PP in the register of information distributors.
18+
Website hosting: TimeWeb.